Being cold, Club Penguin Island
Herbert P. Bear (full name: Herbert Percival Bear, Esquire), or just Herbert, is a polar bear and the main antagonist of Club Penguin. He is also one of the few main characters who isn't a penguin. He is the main enemy and sometimes best friend in Secret Missions, and is the cause of the troublesome events of Mission 5 and onwards.

Unlike real-life polar bears, Herbert hates cold weather. He also cannot swim and is a vegetarian. Since his first appearance, Herbert has been trying to take over the Club Penguin Island and turn it into a warm island paradise. Each scheme he comes up with fails, but he hopes that one day a scheme of his will work so he can destroy Club Penguin's environment, but he was forced to team up with Secret Missions. This information was revealed by Rookie.

Herbert was born in the Arctic Circle, but he hated the cold, so he wanted to head south to some place warm. He traveled on a small iceberg, but the ocean currents carried him all the way to Club Penguin Island, which coincidentally was on the other side of the world. He tried to paddle away from Club Penguin since it was covered in snow, but he tipped his iceberg (which further supported the rumor of tipping the Iceberg). Herbert was unable to swim, and he was rescued by a crab named Klutzy who inhabited Club Penguin Island, of whom he soon befriended.

Over time, he soon grew to despise people. Klutzy was caught but he got away in the Questions for a crab mission. In the sixth mission, Herbert, along with Klutzy, try to save the Ski Lodge in one of his schemes to both keep warm and harm the Penguins. However, he still escapes. Also in Mission 6, he tells agents his story about his life. If players click on the letter in G's pocket in the newspaper (April 11, 2008 edition) and you turn all the Puffles black then you will see a letter Herbert has written to the players saying that "time" is about to run out, resulting in mission 7 in which he makes the clock malfunction by taking out certain parts of it, including the main gear.

He also steals your Spy Phone when he traps you in a cage in Mission 6 (The cage is in a cave that Herbert and Klutzy live in). You used that same cave for shelter in Mission #2 except Herbert renovates it to be more of a living place).

In Mission 8, he creates a giant drill and tries to take the boiler from the Boiler Room, damaging the Gift Shop along the way. Eventually, he gets caught and accidentally damages the boiler. Then he runs off and gets lost in his own tunnels.

In Mission 9, he is located by agents in a secret woodland base behind the Ski Lodge. The Secret Agents then set a gift for him and discover he is making a plan that involves Puffles.

In Mission 10, Herbert is trying to steal a Golden Puffle from the Night Club, not knowing it is a fake. A trap is set for him when he tries to get it and is caught. Unfortunately, he tricks Rookie, saying that he requests to make one last call. When Rookie gives him the phone, Herbert uses the teleport button to escape. It is unknown where he went. However, he left behind some type of seeds.

In Mission 11, he hacks into the PSA data and nearly reveals it to the whole island. On his computer that he stole from Gary's Room, he was about to reveal the secret of the PSA, when the agent pulled out the plug of the computer. Then he teleports a 'gift' and the agent to the HQ. The 'gift' turns out to be a popcorn time bomb. The agent, along with Rookie, Dot, and Gary come out safely but he blasts the HQ and Sport Shop with the time-bomb.

His ultimate plan in Club Penguin is to terrorize all Penguins' lives and finally use the resources on Club Penguin (including trees, buildings, inventions, Hot Sauce, etc.) to become warm. Another reason is to destroy the environment, as revealed by Rookie.

Herbert P. Bear has made machines to arouse chaos in (location) Club Penguin Island. He has made a Mechanical Woodchopper, an Earthquake Driller, and he put together the Electromagnet 3000. He also created the "Popcorn Bomb" which destroys the PSA's HQ. He also rebuilt the Ultimate Proto-Bot 10000. 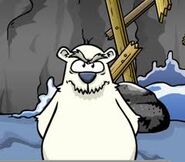 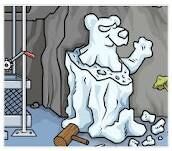 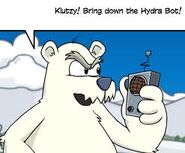 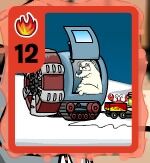 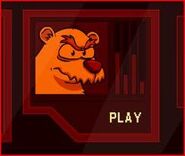 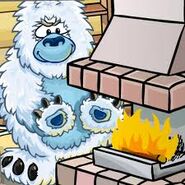 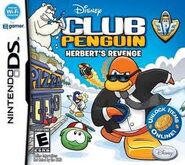 Herbert confuses a penguin because he uses a Klutzy costume

This puffle golden is MINE! 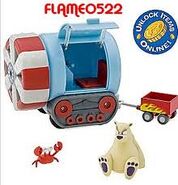 A recipe made by Herbert