In 1932, Ryman moved to California, where he found a job as a storyboard illustrator at Metro Goldwyn Mayer Studios. For a period, during Hollywood's "golden age", he was the sole artist and illustrator for MGM Studios. He helped design many major pictures for Metro-Goldwyn-Mayer and 20th Century Fox, including the screen styling of David Copperfield, A Tale of Two Cities, Mutiny on the Bounty, and Anna Karenina. After working on "The Good Earth" project, he was inspired to leave his job at MGM and tour China, where he made many sketches.

In 1938, he returned to California, where he met Walt Disney at an exhibit of Ryman's works. Walt was so impressed with the paintings that he invited Herb to join the Walt Disney Studios. Herb went on to serve as an art director for feature-length animated classics, such as “Fantasia” and “Dumbo”.[2]

On September 23, 1953, upon the personal request of Walt Disney, Ryman completed several drawings, which Roy O. Disney took to New York City, to show the bankers in order to secure the loan for the original $17 million used to build Disneyland.[3]

Disneyland became the centerpiece of his Disney career. Among his contributions were designs for Main Street, U.S.A., Sleeping Beauty Castle, and New Orleans Square. Herb also contributed concepts for the Jungle Cruise, Pirates of the Caribbean, and for attractions featured at the 1964-65 New York World’s Fair, including Great Moments with Mr. Lincoln.

Ryman worked on many special projects at Disney over a five-decade span. He was the chief designer of the Cinderella Castle at the Walt Disney World.[4]

Ryman was a member of the American Institute of Fine Arts, the Society of Illustrators, and the California Art Club, where he was president in 1963. In 1990, Herb Ryman was inducted [posthumously] into the Disney Legends program. [5] His sister, Lucille Carroll, [6] co-founded the Ryman-Carroll Foundation in his memory. In 2000 the Ryman-Carroll Foundation published "A Brush with Disney" a 252 page story of Ryman's life with color illustrations by Ryman (ISBN 978-0964605961).

The Ryman family came to the U.S. from Heidelberg, Germany. Ryman's father, Dr. Herbert D. Ryman, graduated from Kansas State Medical College, Lawrence, KS in 1907. The U.S. entered WWI in April 1917 and Dr. Ryman join the Army Medical Reserve Corps the following September. He was commissioned a Captain in the Medical Corps 107th Field Artillery 28th Division and sent to the war front in France at his request. On Saturday afternoon, August 17, 1918, he was mortally wounded while ministering to a wounded comrade on the battlefield near St. Gilles, France. Refusing aid, he assisted in rendering and directing the treatment of three other soldiers. Though weakened by the loss of blood, he showed utter disregard for his personal danger, refusing to accept treatment until the other wounded had been cared for. He later died at a nearby aid station. For his act of heroism, he was posthumously awarded the Distinguished Service Cross. He is buried in Arlington National Cemetery. [7]

His mother, Cora Belle Norris, was born in Kentucky and was the great-granddaughter of President Zachary Taylor.[8] After the death of her husband, Mrs. Ryman moved Herbert and his two sisters, Lucille and Christine to Decatur, where she resumed her teaching career. She later was elected Superintendent of the Macon County Schools, where she served for 16 years. Herbert Ryman died in Los Angeles, CA on February 10, 1989, at the age of 78, 16 days after the death of his oldest sister, Christine Pensinger (1903-1989).

The original attractions at Disneyland

The attractions of the 1964 New York World's Fair

The attractions at Disney World

The attractions at Tokyo Disneyland 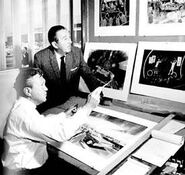 Retrieved from "https://disney.fandom.com/wiki/Herbert_Ryman?oldid=4120760"
Community content is available under CC-BY-SA unless otherwise noted.