Herbie Goes to Monte Carlo
Herbie Rides Again is the second in a series of movies made by Walt Disney Productions starring Herbie the Love Bug, a white racing Volkswagen with a mind of his own. It starred Helen Hayes as Mrs. Steinmetz, Stefanie Powers as Nicole Harris, Ken Berry as Willoughby Whitfield, and Keenan Wynn (reprising his villainous role as Alonzo Hawk originated in The Absent-Minded Professor). It was followed by the theatrical sequels Herbie Goes to Monte Carlo and Herbie Goes Bananas. Another theatrical sequel, Herbie: Fully Loaded was released in 2005 by Walt Disney Pictures.

Alonzo Hawk is a wealthy, ruthless man whose dream is to build his real-estate empire to a world power by replacing old buildings, some of which have historical significance, with skyscrapers and malls. The newest and most ambitious of Hawk's projects is an indoor shopping center, the 130-story Hawk Plaza in San Francisco. The only obstacle is an archaic firehouse inhabited by Mrs. Steinmetz, widow of its former owner, Fire Captain Steinmetz, and aunt of mechanic Tennessee Steinmetz; her displaced neighbor, flight attendant Nicole Harris, and their sentient machines: Herbie the Love Bug, an orchestrion that chooses its own songs, and a retired cable car known as "Old No. 22". It is explained that Tennessee has gone to Tibet to visit his ailing philosophy teacher, while Herbie's former owner, Jim Douglas, is said to have gone to Europe to try his luck racing with foreign cars.

Hawk has made numerous attempts at evicting Mrs. Steinmetz, intending to imprison her in Eternity Towers, a retirement home of his own making. His lawyers have been unsuccessful in these attempts, and when his lawyer nephew, Willoughby Whitfield, appears, he gives him a version of the situation that makes himself out to be the injured party. Willoughby is ready and willing at first, to fulfill Hawk's wishes. Meeting Mrs. Steinmetz and coming to grips with her pretty roommate, Nicole, soon changes his views - Hawk is only rich because he is unscrupulous. Willoughby decides that he can't do Hawk's dirty work and decides to return home. Hawk flies into a rage, but later gets the idea to steal Herbie, "the little car Mrs. Steinmetz goes everywhere in," in an effort to get her to abandon the firehouse.

Hawk explains that as "Hotwire Hawk", at "the tender age of 19" he was "the best known repossessor of cars west of the Mississippi," decides to steal Herbie himself. While driving him downtown, Hawk insults him by saying he is "a one-cylinder hairdryer", and he stops in retaliation, holding up all the traffic. A police car tries to push him, who pushes back, causing a pile-up. Another tries to tow him, but he pulls backwards, causing the rope to break and the two police cars to crash into each other. He then takes Hawk back to his office building and dumps him out before driving away, and he orders his servants to "get that car, dead or alive."

While Herbie takes Mrs. Steinmetz to the market, they are chased by Hawk's servants sent to corner and capture Herbie. He pulls off several daring escapes by jumping through the sedans, racing up a parking garage and vaulting over two parked Volkswagens, and sneaking through the restaurant in the 1909 landmark Palace Hotel. Finally, he rides up the suspension cable on the Golden Gate Bridge, before the oblivious Mrs. Steinmetz tells him that they have to get to the market.

In the meantime, Willoughby decides to go home – in disguise – but Nicole convinces him to stay. On their return from a visit to the beach, they find that every item of furniture from the Steinmetz firehouse, including "No. 22" and even the carpet, has been removed by Hawk. Mrs. Steinmetz, Willoughby, Nicole, and Herbie track the theft to a warehouse, where Herbie smashes the doors open. The security guards are not willing to allow them to retrieve anything without Hawk's approval; Herbie, however, pushes loads of furniture onto them, trapping them. He and company immediately gather their furniture and head home, Mrs. Steinmetz riding in "No. 22" while Nicole and Willoughby follow in Herbie. Piled into "No. 22" is Steinmetz's furniture, as well as a drunk man named Judson, who thinks that he is on the line. Hawk is in hot pursuit, but Herbie distracts him long enough for Mrs. Steinmetz and Judson to get away. When "No. 22" careens out of control, Willoughby, Nicole, and Herbie perform a daring rescue before it plunges into the San Francisco Bay.

Hawk next recruits an independent demolition agent named Loostgarten, a former employee of his who is eager to please. Meanwhile, Mrs. Steinmetz, who is quite upset over Hawk harassing her, decides to confront hi. herself. Willoughby insists that he goes along with her and Herbie in case there is any trouble. She drives Herbie onto the outside window cleaning machine on Hawk's skyscraper to travel up to his penthouse office suite. When they arrive, Mrs. Steinmetz overhears a telephone conversation with Loostgarten about the deal to demolish the firehouse, and activates the window cleaning machine, dousing Hawk with foam and water. Herbie drives into his office and proceeds to chase him around the perimeter of the building. When Herbie threatens to push him over the edge to his death, Mrs. Steinmetz decides that he has gone too far and threatens to sell him to Mr. Honesdale, the used car salesman. Herbie retreats, and they return to the ground.

That evening, disguising his voice to sound like that of Hawk, Willoughby makes a call to Loostgarten, telling him not to demolish the firehouse that night; instead directing him to a certain house with the address of "343 Oleander Heights". He makes a late-night call to Hawk to confirm that the address in question is slated for demolition, waking him up from several nightmares involving himself at the mercy of Herbie. First, he starts counting sheep, after a while, the sheep now have the number 53 on them. Next, Herbie jumps over the fence with shark teeth around his hood, then many more like him start chasing Hawk. The next thing he knows, he is tied to a pole and many Herbies are dressed in Native American clothes and doing a war dance on their hind wheels are throwing arrows at him (one shoots his toupee off). Finally, his dream ends in a style from the King Kong, he is a giant figure atop the Empire State Building with little Herbie-like planes buzzing around him and squirting oil. One squirts him and he falls. Finally, Loostgarten interrupts his nightmare, asking about the address. He tells him, "Of course I'm sure, you idiot! I know it as well as I know my own address!" As it is his own address, a huge wrecking ball crashes through his bedroom wall. Loostgarten is interrupted in the demolition by the outraged Hawk, who falls from the broken wall and chases him.

In the morning, Hawk calls for a truce with Mrs. Steinmetz. Pleased at such a resolution, Willoughby and Nicole go out for dinner, while back at the firehouse, Mrs. Steinmetz invites Judson to sit and talk about their common interests. Hawk violates the truce by sending an army of (construction) earthmovers to crush the firehouse and its inhabitants. Herbie immediately drives off to get help. During his absence, the only means of defense for the firehouse is an antique fire-extinguishing hose, which Judson uses with some accuracy, knocking two earthmovers' drivers out of their seats.

Mrs. Steinmetz and Judson lose their only means of defending the firehouse when the old hose suddenly bursts. Several other Volkswagens, from various places in the city (the roadside, a lock-up garage, car dealers, a drive-in movie, even a beat-up one from the scrapyard) come to their rescue. Together, Herbie and the other Volkswagens battalion scatter Hawk's servants and ruin his scheme. Herbie goes after him, who runs for his life, but Willoughby stops Herbie from harming Hawk by warning him that he "won't be invited to the wedding" – a statement which puzzles Nicole, and he comes to an abrupt halt. After nearly getting knocked down by a police car, Hawk is arrested after telling his bizarre tale of an army of Volkswagens chasing him.

The aforementioned wedding takes place at the firehouse, with Mrs. Steinmetz as the maid of honor and Judson as the best man. Nicole has now become Mrs. Whitfield; she and Willoughby leave in Herbie through an arch formed by the other Volkswagens. 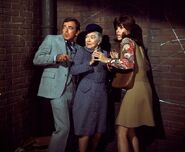 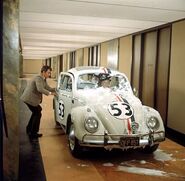