Hercules and the King of Thessaly

Hercules
"Hercules and the King of Thessaly"

The narrator tells of the ruler of Thessaly, Salmoneus, who is not a good leader. His adviser Stephenopolus tells him that he ought to give rule to someone else because Thessaly is in ruin. Salmoneus, to rally the people for him, announces a Zeus-a-palooza at which he says Zeus will appear. Hercules, Cassandra, and Icarus show up for Herc to see his dad. Cassandra has a vision that Thessaly will be destroyed. When Stephenopolus introduces Zeus, King Sal shows up dressed as Zeus. Hercules confronts Salmoneus and the redneck Thesselian citizens attack Herc. Zeus shows up unhappy that someone dared to pretend to be him. He knocks Sal out of the land and the people sets up his son as Thessaly's new king.

In the Grove of Despair, Sal weeps and says that he "might as well be dead." Pain and Panic appear thinking he is really dead. He says he will not let Hades know if they help him return to power in Thessaly. They agree but begin despairing themselves when they find out Hercules is the new king.

Zeus and Hera show up to proudly admire their son, the king. Pain and Panic in human form tell a powerful ruler that Thessaly is declaring war but this army soon turns back when they learn the king is a son of Zeus. Herc begins to take on the many problems caused by the imps, starting with the trash pick-up. He is soon exhaused by his hard work and wants to abandon his job as king, much to Salmoneus' delight. However, just before he is able to leave, his parents come by to admire him again and he realizes he cannot quit or he would disappoint his parents.

Sal is furious to hear this news, but is happy when Pain and Panic transform into a monster. The giant lion charges into the palace and Hercules begins wrestling it. Cassandra's vision comes to fruition as Hercules and the lion begin to destroy Thessaly. Sal sets himself back up as king but the castle is demolished by Pain and Panic. The demons separate and instead of becoming a full lion, they both become the front half. Then both the second half. Hercules makes the lion (and the statue of Salmoneus) crumble. The citizens ask Hercules what to do next. He tells them that they ought to make their own decisions. The people then set up a democracy.

Hercules apologizes to his parents for giving up the kingship. In Thessaly, Pain and Panic give King Sal his throne back, happy that Hades did not find out... until the god of the Underworld shows up and burns them. 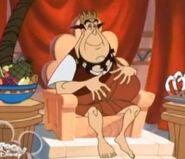