Hercules and the Prince of Thrace

Hercules
"Hercules and the Prince of Thrace"

After Adonis disturbs Gaia, she places a curse on him which can only be removed by the Golden Apples in the garden of the Hesperides. Adonis enlists Hercules and Pegasus to fly him to the oracle at Delphi to find out the garden's location. With Adonis' money, they are referred to an elder shapeshifter named Nereus, who says it is at the end of the world, and to Adonis that only a god can take the apples. After Hercules fails to get one, they have Atlas get it instead while Hercules holds up the sky. Despite a chance to abandon Hercules, Adonis tricks Atlas into holding up the sky again, who in turn injures Pegasus so he can't fly. Fortunately, the pair are able to summon Gaia in the garden and appease her wrath, lifting the curse from Adonis. 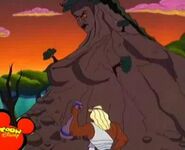