His ugliness, the other animals running away from him due to his ugliness

Shares a kiss with Lara
Herman is a wildebeest from the Timon & Pumbaa TV series who makes his only appearance in "Beauty and the Wildebeest".

Herman appears to be very shy and gets upset easily when other animals run away from him, due to how ugly he looks. However, he still has romantic feelings for a beautiful gazelle named Lara.

Herman is an unattractive wildebeest. He has buck teeth sticking out of his mouth, and one of his horns is upside down. When Rafiki changes his appearance, Herman becomes more handsome.

Herman first appears to have a drink of water, with the animals of the savannah running away from him because of his appearance. The wildebeest has romantic feelings for a beautiful gazelle named Lara, who likes him back. When Lara's friends make fun of him, he leaves and asks Rafiki to turn him handsome.

After Rafiki makes Herman handsome, the wildebeest goes to Lara and the other animals. Lara is impressed with Herman's new look, which makes Mel, a muscular gazelle, jealous and call for a fight. When Herman and Mel are about to fight, Herman puts his head in the water and becomes ugly again, making Mel run away from him.

Lara shows Herman that she's ugly as well when she puts her head in the water. The two fall in love and then kiss. 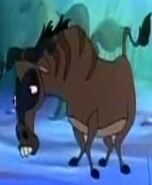 Herman about to get a makeover by Rafiki

Herman and Lara kiss
Add a photo to this gallery

Retrieved from "https://disney.fandom.com/wiki/Herman?oldid=3040597"
Community content is available under CC-BY-SA unless otherwise noted.