To find a new home after his former home was polluted.

Being with Doug and Skeeter and Porkchop, eating stuff especially books and food

Being captured by Bill Bluff and his agents, his home being polluted

Gets rescued by Doug and Skeeter and goes to live in his new home at Crystal Lake
Herman Melville is a character in Doug's 1st Movie. He is the monster of Lucky Duck Lake.

In the beginning of the film, Doug Funnie and his best friend Skeeter Valentine ride their bikes out to Lucky Duck Lake when they are spotted by Roger Klotz and his gang, who laugh at them believing the whole thing about the monster to be fake. Skeeter tells Roger to go ahead and laugh because he and Doug will find the monster. As Doug and Skeeter walk deeper into the woods near the lake, they find a tree branch blocking their path and decide to leave their bikes to which they then hear noises. Doug decides to go one way while Skeeter goes the other way to which Doug discovers the noises that he and Skeeter heard were Roger and his gang getting ready to pull a prank on them by dressing up as a monster to which Doug tries to stop them but they take off Doug's clothes except his underwear and put it up in a tree. Meanwhile, Skeeter finds a dirty part of the lake and hears a noise and quickly grabs his camera to which Roger and the gang sneak up behind Skeeter and roar at him causing Skeeter to scream and accidentally take a picture of them, revealing the boys pranks to which Skeeter sarcastically tells them very funny and believable but then the real monster appears from behind Skeeter causing him to scream once again and drop his camera which goes off when it hits the ground to which Roger and his gang run for their lives out of the forest as the monster's shadow falls over Skeeter and it lets out a roar as Skeeter closes his eyes and the opening credits roll.

The next day after school, Doug and Skeeter go to the mall to get Skeeter's camera developed and discover that the camera managed to take a picture of the monster's foot when it hit the ground to which Doug believes they will be famous. Doug has a fantasy about being a superhero named Quailman who saves the Valentine's Day Dance from the Lucky Duck Lake Monster and he manages to impress the girl of his dreams played by Doug's love interest Patti Mayonnaise.  After his fantasy is over, Doug tells Skeeter that they must find the monster, but when they go back to the woods to get their bikes they discover someone has taken them leaving both bike tracks and monster footprints to which the boys believe that the monster ate their bikes but later on back at Skeeter's house they discover their bikes outside and find monster footprints leading into the house to which they realize the monster is inside.  After putting on protective gear the boys begin to search the house to which they accidentally knock over a lamp causing a blackout in the neighborhood.  The boys don't find anything upstairs so they go down stairs to check Skeeter's bedroom to which they open Skeeter's closet door and don't find anything but then Skeeter's flashlight goes dead and while Doug goes to get another one Skeeter decides to check under his bed to which he can't bend down because of his gear to which he hears someone coming and thinks it's Doug and asks him to check under the bed to which Skeeter realizes it's the monster and begins to run for his life accidentally running into the door and falling backwards into the wall and then Skeeter tries to escape from the monster again by running up the stairs but he falls back down the stairs and once again falls against the wall causing the garbage can to fall on Skeeter and the welding hat he was wearing to fall off onto the ground to which the monster thinks Skeeter's head fell off and cuddles the hat in his arm while sitting on Skeeter's hat to which Skeeter and Doug who returns from getting a flashlight realize the monster isn't scary. 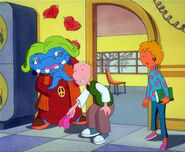 Retrieved from "https://disney.fandom.com/wiki/Herman_Melville?oldid=3222254"
Community content is available under CC-BY-SA unless otherwise noted.