The Greek Messenger of the gods

God of Travelers
Messenger of the Gods

Olympus in trouble, being captured, Pain and Panic

“Yeah, Hercules! Thank you, man!”
―Hermes to Hercules while fighting Pain and Panic

Hermes is an Olympian God, serving as a royal messenger of the Gods, from the 1997 animated feature film, Hercules.

As a god, Hermes possesses the natural powers and abilities such as immortality, omnipresence, superhuman strength, and magic.

Later on, Hermes catches sight of the Titans returning to Mount Olympus and quickly alerts Zeus, Hera, and the other gods for battle. He is the last god (aside from Zeus) to be captured, being kidnapped by Pain and Panic; the latter steals his glasses while the former barks into his ear. After Hercules arrives and frees the gods, Hermes regains his glasses and beats the imps with his staff.

During the finale of the film, Hermes is present to celebrate Hercules' success. He summons the Muses to sing an "A Star Is Born" as the film closes out as he plays the piano.

In the animated series, taking place during Hercules' training years on Phil's Island, Hermes makes occasional appearances and sometimes joins Hercules on one of his misadventures. For example, in "Hercules and the Bacchanal", he volunteers alongside Hercules in watching over Phil's island as the satyr leaves for the weekend. In "Hercules and the Romans", he is given the name of Mercury by Icarus.

Hermes made a few cameo appearances in the animated series. In "Donald Wants to Fly", his shoes are stolen by Donald Duck as he tries to teach himself how to fly, which goes unsuccessful.

Hermes in the House of Mouse

In the Animated Storybook.

The comic adaptation of the film. 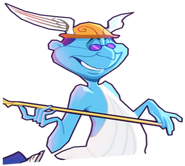 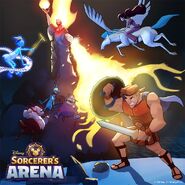