October 8, 1987
"Hero for Hire" is the nineteenth episode of DuckTales.

Scrooge is giving an opening speech at the new McDuck Bank of Duckburg. When questioned about the bank’s safety measures, Scrooge explains that Gyro has built a special Anti-Beagle Boy alarm for the bank, which can detect any Beagle Boy’s presence. Scrooge gives a demonstration of the alarm by showing it a picture of Bankjob, which sets it off, although he doesn’t know how to turn it off. In spite of the alarm, Bankjob, Babyface and Bugle are at the back of the crowd, hidng and wearing detective each to disguise them from Scrooge McDuck.

Launchpad is flying above in his helicopter with Doofus, when he hears the alarm, and heads down towards the bank. However, a banner is hanging from his helicopter, which gets caught on an antenna on the bank’s roof, and as a result, the copter crashes into the bank, causing the building to collapse. Nobody gets hurt from the crash, but Scrooge gets furious with Launchpad and fires him.

Later on, Doofus heads over to Launchpad’s house, and encourages Launchpad to become a public hero if he can’t work for Scrooge anymore. To start, Launchpad attempts to rescue a cat stuck in a tree, although he ends up falling in a Dumpster. Afterwards, Doofus sees a window washer outside a window of an office building, and tells Launchpad to save him. Unable to use the crowded elevator, Launchpad runs up the stairs to the top floor, only to learn that the window washer never needed help in the first place, and is accidentally flung down the garbage chute.

After Launchpad has gotten himself some business cards, Ma Beagle, who’s just stolen a bag full of money from a licorice store, runs past Launchpad, and convinces him to help her cross the street in order for her to hide from the police. Launchpad gives her a card, and she kindly retreats to her hideout, where the Beagle Boys tell her about the alarm, and how they’ll be unable to rob banks if one spots them. Ma shows her sons the card she got, and they get an idea. Soon Launchpad receives a call from the Beagles, who are posing as a production company, and want him to star in their next movie.

Launchpad meets up with the Beagles, and since he can’t figure out who they really are, changes into a superhero-esque costume that they’ve provided him with, titled "The Webbed Wonder." Bankjob, who’s posing as movie director Mr. Spielbig, suggests that the first scene that should be shot is the bank scene. Scrooge, who’s already had his bank rebuilt somehow, sends for Launchpad to pick up some gold, but Mrs. Featherby reminds Scrooge that he fired Launchpad, which makes him wonder how his ex-pilot is doing.

The Beagles, Launchpad, and Doofus arrive outside the bank in a van, where Bankjob convinces Launchpad that the bank’s safe isn’t safe, and that he needs to retrieve money from it. Launchpad starts his scene, and after forgetting his lines, manages to heist several bags of money for the Beagles, and they all drive off with Launchpad none the wiser. After tricking Launchpad into robbing a second bank, Launchpad, thinking he really is a movie hero, robs a third bank with his own style.

Launchpad, or rather, the Webbed Wonder, is in a lot of trouble, and the next day, Scrooge can’t help but feel responsible for the whole ordeal, so he sets out to set Launchpad straight. While eating breakfast with Doofus that morning, Launchpad learns the truth about his robberies from the newspaper, and he sets out to tell the police. At the station, Launchpad receives a call from his house. Apparently, Doofus spilled the beans about Launchpad’s plan, and Bankjob demands that Launchpad return to them to film the next scene without telling the police. When Launchpad leaves the station, Ma calls in, telling where they can find out where the Webbed Wonder will be next.

When Launchpad shows up at the Beagle Boys’ studio hideout, the police show up, and Scrooge and Duckworth follow them there. While Scrooge convinces the police not to hurt Launchpad, the Webbed Wonder fakes his own death by crashing the 'copter into a bridge. With everyone thinking Launchpad is dead now, he sets out to rescue Doofus. Although Doofus is not at his house, Launchpad does spot a message that the chubby boy left in his maple syrup that reads “Beagle Boys."

Launchpad steals an alarm from a bank and flies around in his biplane to find the Beagle Boys. The alarm leads him to Ma’s cabin in the woods, where the Beagles spot him coming, and hide Doofus under a lampshade. Since the Beagles aren’t in their studio disguises, Launchpad doesn’t recognize them, and he remembers Ma as the kind lady he helped across the street. When Launchpad sees a family portrait of the Beagles and discovers Doofus under the lampshade, he realizes the truth, and the two ducks flee from the cabin when a huckleberry hand-grenade cake blows up in the Beagles' faces.

Launchpad and Doofus get away in the Beagle’s van, which is full of the stolen money, but the Beagles follow them back to Duckburg in Ma’s car. The car ends up crashing into a police station, and because they weren’t wearing seatbelts, Bankjob, Babyface, and Bugle go flying into the back of a police van, while Ma makes her getaway. Scrooge learns that Launchpad was never dead, but is still mad at him. Doofus, however, congratulates Launchpad for rescuing him and retrieving the stolen money and convinces Scrooge to rehire him. Launchpad asks for a raise, and since Scrooge proclaims that he’s already been paying Launchpad twice what he’s worth, Launchpad foolishly agrees to work for half of his original salary.

Launchpad with his hair styled. 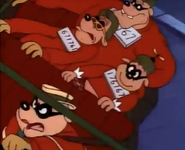 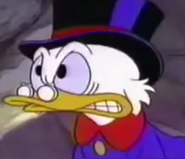