April 15, 2017 (Celebration Screening)
October 16, 2017 (Television premiere)
"Heroes of Mandalore" is a two-part television special that serves as the fourth season premiere of Star Wars Rebels. It premiered on October 16, 2017.

Before making its television premiere, the film was first screened at the Star Wars Celebration in Orlando on April 15, 2017.

The Mandalorians and the Jedi, led by Sabine Wren, are attempting to rescue Sabine's father, Alrich Wren, who is being held prisoner in an Imperial Outpost on Mandalore. The place is guarded by Saxon Clan Mandalorians, who serve the Empire. On Sabine's lead, the Mandalorians and the Jedi move in and attack the outpost. A battle between the Mandalorians and the Imperials breaks out. They quickly overpower the Imperial forces holding the outpost, but as the battle goes on, Imperial walker reinforcements arrive in the form of two AT-DPs. It almost looks like the Empire has the upper hand, especially when the leading trooper threatens to kill Sabine after subduing her with a stun blast. However, unexpected reinforcements arrive, forcing the Imperials to retreat. With the outpost theirs, they go inside, only to discover the place is empty. The Mandalorians who helped them were members of Clan Kryze. Among them is Lady Bo-Katan Kryze: the sister of Mandalore's late ruler, Duchess Satine Kryze. According to Bo-Katan, the whole thing was a trap to lure them in. Unfortunately, Ursa Wren was unable to inform them when she got word of this intel, and sent Bo-Katan ahead to reinforce Sabine. According to Fenn Rau, Bo-Katan is still seen by many as Mandalore's rightful ruler after her late sister, but after the Empire took over, she refused to obey the Emperor and was betrayed by Clan Saxon. Seeing that Bo-Katan could be Mandalore's true leader, Sabine offers her the Darksaber, but Bo-Katan turns her down.

Before heading out, Ursa arrives with news that the Empire is transporting Sabine's father to the Mandalorian capital for a public termination. They arrive at where the prisoner convoy transporting Sabine's father is sure to pass. Their plan is to ambush the convoy before they make it to the capital. Ursa's group reports that they have engaged Saxon's transport and have diverted the prisoner convoy towards the canyon where Sabine's group is waiting to ambush them. They spot the three transporters approaching, and once they are close enough, Sabine engages them. She distracts the Imperials and Commandos long enough for the others to move in and join the battle. They take out the speeders and troopers protecting the transport holding Sabine's father, and Ezra climbs aboard to save Alrich before the transports go over the cliff.

Afterwards, Alrich thanks Ezra for saving him and then turns to Sabine. After years of being apart, he embraces his daughter with hug, delighted to see her again, as Sabine is to see her father. He even compliments the artwork on Sabine's armor. They prepare to get back on the move, when they receive word from Ursa's group that the Empire has just deployed a single scout walker with no additional support while their remaining infantry have retreated. Listening in on Fenn's comm, they hear a sound that Sabine dreadfully recognizes. She desperately orders them to retreat, but then they spot an explosion from where Ursa's group was. Fearing the worst, Sabine rushes over with the others following after her. Upon arriving, they find every Mandalorian under Ursa's command disintegrated. All that was left of them was their armor and burning ashes. All, except Sabine, are puzzled by what could have done this, only to be told by Alrich that it was a weapon created by Sabine, who collapses in grief as she looks over the carnage.

Sabine remains devastated by what just happened, and is already blaming herself. The weapon that killed all these Mandalorians is her own design. It has the ability to neutralize Mandalorian armor. It has long been a rumor until now, but Sabine, overwhelmed with guilt, had no doubt that the Empire is going to use it against the Mandalorians. Believing that her mother and brother are dead, Ursa and Tristan emerge from the smoke, injured but alive. They got caught in the edge of the weapon's ray, but managed to make it out when Sabine alerted them. However, the others were not so lucky. Just then, the Imperials show up to finish them off, accompanied by three TIE Fighters. However, the Jedi and the Mandalorians are rescued by a Gauntlet Fighter. Two of the surviving TIEs pursue them and take out their weapons. As Sabine affects repairs, Bo-Katan and Ezra fly outside with Jetpacks and take out the pursuing TIEs. Meanwhile at the Mandalorian capital of Sundari, Tiber Saxon is showing Grand Admiral Thrawn, by hologram, a recording of the weapon's test, calling it The Duchess. As Thrawn can see the energy pulse from the generators mounted on the walker is drawn to Mandalorian armor, super-heating it and instantly vaporizing its targets. All the while doing no harm to their Imperial Stormtroopers. While he admits to be impressed by the weapon's effectiveness, Thrawn has some concerns. The people of Mandalore might turn against the Empire instead of swearing loyalty to it. Tiber, completely loyalty to the Empire, assures the Grand Admiral that fear will compel the people of Mandalore to join the Empire once the weapon is unleashed. Thrawn also has another concern: The weapon is not at its full capacity, as Tiber was only working with parts of the prototype. In order for it to be fully operational, Tiber needs the weapon's creator, Sabine Wren.

Meanwhile, as the Mandalorians and Jedi fly to their base camp, Bo-Katan violently holds Sabine against the wall, calling her a traitor for what she has brought upon Mandalore. Sabine admits her foolishness: At the time, she was young and arrogantly took on designing that weapon. When she discovered the Empire was planning to use it against her people she sabotaged the prototype and destroyed the plans. She thought that would be the end of it, but it now appears the Empire has somehow rebuilt it. When they arrive at their base, Sabine is already made unwelcome by the other Mandalorians who threaten to shoot her for her foolishness. Ursa and Tristan threaten to attack back if anyone tries to kill Sabine, but she steps forward to accept the consequences of her actions. However, Sabine first admits her regrets, but points out that while the Empire has the weapon, it is only functioning at a fraction of its capacity. She gives the Mandalorians a choice to fight each other or work together to destroy this weapon once and for all. Even though she is as angered like everyone else, Bo-Katan knows that Sabine is right. This is not the time to be divisive, and since Sabine is the one who designed the weapon, they are going to need her if they are to succeed in destroying it. At the briefing, Alrich believes that Tiber is keeping the weapon aboard his Star Destroyer outside of Sundari. No doubt it will be well guarded. Sabine's plan is to get two teams aboard. One to find the weapon, and the other to wipe out every shred of data on it from the Imperial computer systems. Though tempted by the idea of turning the weapon against the Imperials, Sabine stands by her original plan to destroy it. Sabine plans to personally foresee to the weapon's destruction accompanied by Bo-Katan, while Kanan and Ezra take Chopper to the data core. As they go through their infiltration plan, Bo-Katan voices her changed opinion about Sabine to Fenn. Though she doubted her from the start, she has seen that she has become an inspiring courageous leader.

Later, the Jedi and Mandalorians arrive at Sundari, and board Tiber's Star Destroyer unnoticed. They find the weapon's core has been removed from the walker that attacked Ursa's troops, but Sabine has a strong bet that it is being kept in the control room above. Suddenly, they are spotted and a gunfight breaks out. During the battle, Sabine and Bo-Katan make their way to the weapon while Ezra, Kanan, and Chopper head for the data core. Sabine and Bo-Katan find the weapon, but it activates and strikes them with its energy pulse as Tiber Saxon enters the scene. At Tiber's mercy, Sabine refuses to help him upgrade the weapon. So he tries persuading her by striking her and Bo-Katan again with the weapon's energy pulse, not to kill them but to make them suffer. He even turns it on his colleague, Captain Hark, who is worried the Empire might use the weapon against all Mandalorians, including themselves. At last, Sabine gives in, especially when he threatens to kill Bo-Katan. Despite her plea not to, Sabine goes ahead in making adjustments to the weapon. However, when Tiber tests it out, the weapon backfires on him and all the Stormtroopers aboard. Sabine is on the verge of wanting Tiber to die and use the weapon against the Empire, out of personal revenge for using her own creation against her fellow Mandalorians, only to be stopped by Bo-Katan. She tries to convince her that this is not the way to free Mandalore, reminding her that she came to make things right. For Mandalore, Sabine uses the Darksaber to slash the weapon, damaging the core to the point of causing it to go critical, threatening to destroy the entire Star Destroyer. With all data on the weapon erased as well, the Jedi and Mandalorians make a hasty retreat before the weapon blows up, and with it, Tiber and his Star Destroyer.

Upon returning to base camp, Bo-Katan is surprised to discover all of Mandalore are awaiting her leadership. Sabine again offers her the Darksaber, and this time she accepts it, declaring herself leader of Mandalore. 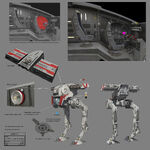 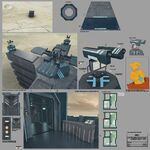 Retrieved from "https://disney.fandom.com/wiki/Heroes_of_Mandalore?oldid=3810608"
Community content is available under CC-BY-SA unless otherwise noted.