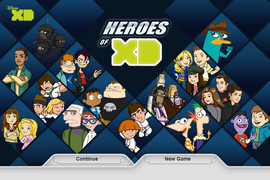 Heroes of XD is a free online video collectible card game on the Disney XD website. In it, players build a deck of cards depicting characters from Phineas and Ferb and other Disney XD shows to do battle with the villainous Enemies of XD.

“Agents! We need your help against the enemies of XD! All of our Allies are ready to help!”
―Text displayed upon starting the game

The deck consists of 15 cards, each of which depicts a character(s) from Disney XD programming including Phineas and Ferb, Crash & Bernstein, Kick Buttowski, Kickin' It, Lab Rats, Pair of Kings, Randy Cunningham: 9th Grade Ninja and Zeke and Luther. In addition, each card contains ratings and may contain a special ability that are used in battle against the Enemies of XD.

Upon starting a new game, the player is given a "starter deck" of 15 cards, including Phineas and Ferb. One randomly-selected additional card is obtained upon winning a battle. A player's deck is limited to 15 cards, and additionally the total of the cards' attack ratings may not exceed 50 (excluding ratings increases given by upgrades).

Each player is dealt three cards from their deck. On each turn, the attacking player selects one of their cards and plays it to the table. The defending player then plays one of their cards. In addition, there may be leftover cards from previous turns, and players may gain the ability to play additional cards based on the cards' special abilities, if any.

Once each player has played, if the sum of the attackers' Attack stats exceeds the defenders' Defense stats (including any bonuses/penalties provided by the cards), the attacking player receives 1 point for each surplus Attack unit. In addition, certain cards directly award points to their players.

One a player reaches a set number of points (10 points in the beginning matches, increasing as you progress through the game), the match is over.

Retrieved from "https://disney.fandom.com/wiki/Heroes_of_XD?oldid=3845781"
Community content is available under CC-BY-SA unless otherwise noted.