Hidden Worlds was a game created by Playdom. It is a hidden object game, in which you select hidden objects in various scenes from Disney movies to progress through the game. The game was available to play on Facebook, Playdom.com, iOS, and Google Play.

Find Hidden Objects in scenes from your favorite Disney movies! Journey to a world of imagination and recreate the story worlds of Beauty and the Beast, Tangled, Aladdin, The Little Mermaid and more classic Disney films. Meet Chrona and the Inklings, brand new Disney characters who will help you keep your Disney Kingdoms safe from a mysterious new villain and let you see your favorite Disney films in a whole new way!

Franchises in the game 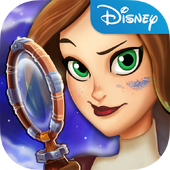