Start a Wiki
The Hispaniola is the ship which serves as the primary location for much of Muppet Treasure Island.

The ship is owned by Squire Trelawney & Son: Master Ship Builders, who financed the voyage to Treasure Island. The ship's figurehead is in the shape of Statler and Waldorf, who occasionally come alive to make snide comments about the crew.

The Hispaniola is captained by Abraham Smollett, with first-mate Samuel Arrow. Rizzo makes some money on the side by charging tourist rats for a Caribbean cruise.

The crew is hired by Squire Trelawney with the help of Mr. Bimbo and the ship's cook, Long John Silver. The crew turn out to be a group of pirates after Flint's treasure. The pirates mutiny when the ship reaches Treasure Island, planning to take the treasure and leave the captain and his friends marooned on the island.

Jim Hawkins, Gonzo, Rizzo, Dr. Livesey, Beaker, the Squire, Mr. Bimbo and Samuel Arrow reclaim the ship by scaring the pirates off with the "ghost of Samuel Arrow". They crash the ship into Treasure Island, rescuing Smollett and Benjamina Gunn. In the end, Smollett and crew take the ship back to England, where the pirates will stand trial for their actions -- except for Long John Silver, who sneaks off in a leaky rowboat.

In the documentary The Tale of the Story Beyond the Tale, production designer Val Strazovec said, "The star should be the ship. The ship was quite a challenge to do because I was trying to create a ship which will be friendly to Muppets and also accept humans".

The ship was a stationary set piece, and the surrounding sets moved around the ship. The crew would strip and build the sets around the ship to change from the Hispaniola at the docks of England, the beach of Treasure Island, or out at sea. The full ship set was built on a giant gimbel that simulated the rocking motion of a ship on water. Director Brian Henson feared that the cast and crew would get sea-sick due to the rocking ship, and made everyone take Dramamine to combat this. However, the rolling motion of a ship at sea and the simulated gimbel conditions were different, and sea-sickness was not a problem. On the other hand, staying awake and alert after taking drowsiness-inducing medication was a problem for some of the cast and crew, including Tim Curry. 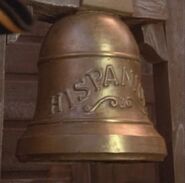 The miniature Hispaniola being shot in the studio parking lot.
Add a photo to this gallery

Retrieved from "https://disney.fandom.com/wiki/Hispaniola?oldid=1552637"
Community content is available under CC-BY-SA unless otherwise noted.