Slender cat with stripes, green eyes, purple fur, pink bow around her neck (sometimes pink collar with a bow on it), pink tuft of hair

Runny the Bunny (toy)
Hissy is the pet cat of Bob and one of the main characters in Puppy Dog Pals. She acts as an older sister to Bingo and Rolly.

Like a typical cat, Hissy spends most of her time playing and napping. She is very independent and would rather keep to herself. She has a sarcastic and snarky side mainly when putting up with Bingo and Rolly's antics. Though the pups can get on her nerves at times she loves them as little brothers and likes nothing more than them to be happy.

She can get spooked easily mainly when being awakened when napping or when she is on a crazy adventure with the pups. One of her more notable fears is venturing into pumpkin patches at night as she gets frightened very quickly. 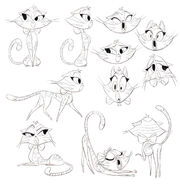 Hissy Concept Art By Jeremiah Alcorn?
Add a photo to this gallery

Retrieved from "https://disney.fandom.com/wiki/Hissy?oldid=4089032"
Community content is available under CC-BY-SA unless otherwise noted.