The Avengers: Earth's Mightiest Heroes
Hulk and the Agents of S.M.A.S.H.
What If...?

Clancy Brown (Hulk and the agents of Smash)
Travis Willingham (Guardians of the Galaxy)
David Chen (What If...?)

Hogun is a Marvel Comics character who is a friend of Thor and one of a trio of Asgardian adventurers known as the Warriors Three. His fellow Warriors are Fandral and Volstagg.

Hogun was created by Stan Lee and Jack Kirby.

Hogun is a serious warrior with a largely pessimistic view of the world. He is notorious among his companions for never smiling and often predicting unfavorable outcomes to their situations, thus earning him the name Hogun the Grim. This sometimes leads to light-hearted disputes between him and the more cheerful natured Fandral.

Hogun rarely speaks, but when he does, he is always listened to because of his recognized wisdom. He is a loyal friend and a precious ally on the battlefield, always ready to cover his teammates during a fight. This is demonstrated when he agrees to accompany Thor to Jotunheim alongside Fandral and Volstagg, stating that the Warriors Three always fight together. He also demonstrates his loyalty during the battle with the Frost Giants, when he saves Sif's life despite being attacked by his own opponent at the same time.

Hogun possesses the same superhuman physical attributes as his fellow Asgardians: strength, endurance, speed, and reflexes. He is also a very capable fighter; in battle, he wields a morgenstern (a spiked mace) but is also skilled at throwing knives.

Hogun was present when Frost Giants from Jotunheim infiltrated the vaults of Odin while most of Asgard was preoccupied with a ceremony naming Thor as heir to Asgard's throne. When Thor became enraged by the interruption, Hogun readily agreed to accompany him to Jotunheim to exact retribution for the jotuns' aggression.

The Warriors Three, together with Thor, Sif, and Thor's brother Loki, journeyed to Jotunheim where Thor challenged Laufey, the jotuns' ruler, over the incident in Asgard. Laufey, revealing that he had strength in numbers and mindful of an ancient truce between the two peoples, dismissed the Asgardian group from his realm. As they turned to leave, Thor was baited by the heckling of a nearby jotun, plunging them all into mortal combat. Fandral was grievously injured in the fight and Hogun had to help carry him clearly. The Asgardians were saved by the timely arrival of Odin, who intervened and quickly drew them back to Asgard.

After Odin banished Thor to Earth and subsequently fell into his "Odinsleep", Loki claimed the throne as Asgard's regent. Being the wisest of the Warriors Three, Hogun was one of the first Asgardians to suspect Loki's secret alliance with the Frost Giants. Concerned over the coup, the Warriors and Sif left Asgard to find Thor on Earth. There, they faced an unexpected threat when Loki dispatched The Destroyer to kill Thor. They were no match for the construct, and it battered them without much effort until Thor's self-sacrifice restored his power and allowed him to defeat it. The Asgardians then returned to their world where the Warriors Three parted company with Thor, who pressed on alone to deal with his brother. Hogun was last seen alongside Fandral and Volstagg at a celebration banquet following the confrontation.

Hogun traveled along with the Asgardians to Vanaheim to stop the Marauders, who were causing great chaos. He fought fiercely during the battle. When Thor arrived on the battlefield, the fight was equilibrated to the side of the Asgardians. Eventually, Thor defeated the stronger of Marauders, which caused the other Marauders to surrender. After the battle, Hogun asked where they had to go now, the God of Thunder suggested that he should stay in Vanaheim with his people. Hogun thanked Thor for their friendship.

During the Convergence, Hogun witnessed how the humans unintentionally attacked Vanaheim. 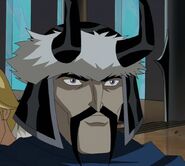 Hogun wielding his mace in Jotunheim. 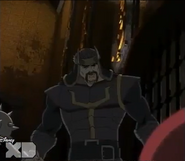 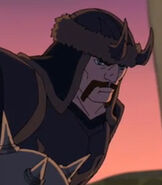 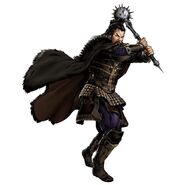