Sarah Paulson (2015-present)
Holland Virginia Taylor is an American film, stage, and television actress, perhaps best known for her portrayal of matriarch Evelyn Harper on the long-running CBS television sitcom, Two and a Half Men from 2003 to 2015.

Her Disney roles include Beatrice Stanhope in George of the Jungle, Queen Myrrha in Hercules: The Series, and Prudence in Cinderella II: Dreams Come True and Cinderella III: A Twist in Time. She also played Andrea in the ABC TV show, Speechless.

Beatrice Stanhope
(George of the Jungle) 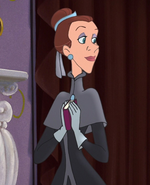 Queen Myrrha
(Hercules:The Animated Series)
Add a photo to this gallery
Retrieved from "https://disney.fandom.com/wiki/Holland_Taylor?oldid=4085890"
Community content is available under CC-BY-SA unless otherwise noted.