Deceased
Hollywood is a gargoyle in the Labyrinth Clan. He is the clone of Broadway.

Thailog and Demona commissioned Dr. Anton Sevarius to create Hollywood as a part of their clone clan. Sevarius and Thailog aged Hollywood to his peak physical age, leaving him radically discolored. Demona named him, and Thailog programmed him simply to "obey Thailog." Like the rest of the clones, Hollywood was sent against the Manhattan Clan, but he was defeated. Talon adopted the clones, and planned to teach them to think for themselves and "to use verbs." 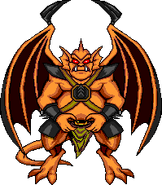