November 20, 2021
"Hollywood Hop Pop" is the first segment of the forty-eighth episode of Amphibia.

Hop Pop tries to make it as an actor in Hollywood.

Anne takes the Plantars to Hollywood for the day to show them around. Hop Pop immediately becomes smitten with his surroundings and runs off despite Anne warning him to stay close in case Mr. X returns. Hop Pop ends up in line with a group of elderly actors and befriends a human doppelganger of himself named Humphrey Westwood. He allows Hop Pop to audition before him, despite the fact that he has been waiting for his big break for 45 years. Hop Pop, thinking he is auditioning for a play is confused, but when he is told that he is perfect in every way, Hop Pop declares "Say What!?", earning him the part. Hop Pop begins to feel guilty, despite Humphrey congratulating him.

The next day, Anne discovers that Hop Pop auditioned for a commercial which has quickly picked up steam and has become popular. Unfortunately, this also means that Mr. X has seen it and heads to Hollywood with Jenny to capture him. Anne and the Plantars head into town to see if they can stop the ads, but it is too late and Hop Pop gets a call from big time director Mitch Harbor to star in his next feature film. Not wanting to pass on the opportunity, Hop Pop heads to his office, which is in a water tower, just as Mr. X arrives. A chase throughout the movie studio and its various productions ensues with Anne, Polly and Sprig chasing Mr. X while he chases Hop Pop.

Just as Hop Pop arrives at the office, he runs into Humphrey who he learns is a janitor for the studio and still happy for him. Feeling guilty, Hop Pop tells Humphrey that he wants to give the part to him as he knows he has been waiting for years for this moment. Humphrey goes in and gets the part just as Mr. X barges in with a SWAT team and is humiliated once again. Anne, Polly and Sprig are relieved to see that Hop Pop is okay and he admits that the opportunity rightfully went to Humphrey. As they head home on a golf cart, Hop Pop admits that he has finally gotten over acting and wants to go into directing instead. A claim that results in Anne shoving him out of the golf cart. 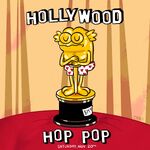