Screenwriter, story artist
Homer H. Brightman was an American screenwriter and story artist, who worked for Walt Disney Animation Studios, where he prominently worked on films related to what is collectively known as the Package Film Era. (1942-1949).

Brightman was born on June 1, 1901 in Seattle Washington and began working for Disney in 1935 to 1950. His time at the studio is detailed in his memoir, Life in the Mouse House: Memoir of a Disney Story Artist, where he acknowledged Walt as a great pitchman and perfectionist but also often difficult to work with because of this as well as details that led to the 1941 animation strike. Despite the turmoil, he continued to work with on projects, like The Three Caballeros, Make Mine Music, Fun and Fancy Free, The Adventures of Ichabod and Mr. Toad, and Cinderella. He also worked as the original gag writer for Al Taliaferro's Donald Duck newspaper comic strip from 1938–1940, before Bob Karp took his place.

Brightman died on January 30, 1988. He was buried in Albuquerque, Bernalillo County, New Mexico at Gate of Heaven Cemetery, but some sources claim he died in Kirkland, Washington.

From left to right: Roy Williams, Brightman, and Ted Sears 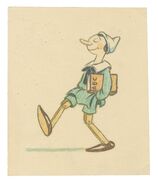