“We are off on an adventure!”
―Hondo Ohnaka

Hondo Ohnaka is the leader of the Weequay pirates of Florrum who appears in Star Wars: The Clone Wars and Star Wars Rebels.

During the Clone Wars, Hondo was a pirate who operated a pirate gang on Florrum. Hondo had connections with notorious bounty hunters, being an associate of bounty hunter Jango Fett and the former lover of the bounty hunter Aurra Sing. He gained notoriety during the Clone Wars when he captures Count Dooku, the leader of the Confederacy of Independent Systems, and attempts to sell Dooku to the Galactic Republic for a ransom, which led to the capture of Obi-Wan Kenobi and Anakin Skywalker. The two Jedi and Dooku were able to escape, but the Jedi continue to have run-ins with Hondo throughout the war.

Hondo later delivers missile launchers at the request of the Republic to rebel forces on Onderon fighting against the Separatist on their planet. His base is destroyed afterwards by General Grievous. The Sith Lord Maul and his brother Savage Opress attempt to recruit Hondo's gang into their army, however Hondo and the pirates who remained loyal to him defeat the Sith brothers with the aid of Kenobi and Adi Gallia off Florrum.

Hondo Ohnaka debuts in the fourth episode of Season two, "Brothers of the Broken Horn". After the fall of the Republic, Hondo lost his gang and leadership to the Empire. Because of this, Hondo turned to smuggling and betting to survive the years that followed the Clone Wars. After capturing Vizago and ransacking his ship, Hondo ran into Ezra Bridger (under the alias of Lando Calrissian) and enlists Ezra into becoming a pirate. The two later meet up with Azmorigan to commence in trading the generators Hondo stole from the ship, but Azmorigan turns on the two and reveals Ezra's deception. A battle ensues, ending with Azmorigan escaping and Hondo keeping the credits. Hondo learns that Ezra is a Jedi but decides to invite Ezra to become a part of his crew instead.

While exploring Vizago's ship, Ezra frees Vizago to get the generators back from Hondo, though Hondo escapes on Ezra's ship with the generators and Vizago's credits. However, Hondo travels to the Ghost since the Phantom’s autopilot was programmed to return to the ship and returns the generators just as Ezra arrives. With the credits from Azmorigan, Hondo departs from Ezra and the crew.

Throughout the course of the series, Hondo often provides the Lothal Rebels with missions and opportunities that can help improve the Rebellion's fight against the Empire, which usually gets them in drastic situations. While Ezra has faith in Hondo, the rest of the Lothal Rebels do not completely trust him. Whenever things go from bad to worse, Hondo would flee the scene or change sides for the sake of his own life.

In the series finale, Hondo joins Ezra and his allies in freeing Lothal from the Empire. It is here that Hondo reveals that he cares deeply for Ezra and would do anything for him.

Hondo, still active during the events of the Sequel Trilogy, has made an effort to go straight and establish an honest business in the form of "Ohnaka Transport Solutions", though this is primarily a front for his smuggling operations. Partnering with old acquaintance and fellow smuggler Chewbacca, Hondo has secured the use of the Millennium Falcon to send crews of spacers out onto various missions across the galaxy while operating out of the Black Spire spaceport on Batuu.

In the attraction, Hondo is depicted through the use of an A-1000 Audio-Animatronics figure, the second most advanced animatronic produced by Walt Disney Imagineering after the Shaman of Songs in Na'vi River Journey.

During the ride, Hondo acts as guests' guide, reminding them to act as they interact with the various buttons and switches in the Falcon's cockpit to ensure their mission's success.

Hondo Ohnaka and Chewbacca on the poster of the attraction Millennium Falcon: Smuggler's Run.

Hondo in The Sims 4 Star Wars: Journey to Batuu. 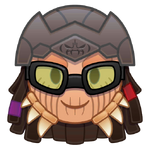