Created by Honey Lemon in collaboration with Hiro Hamada, the chem-purse was themed after Honey's love of chemistry. It is equipped with a digital depiction of the periodic table that allows Honey to concoct chemical formulas in the form of "chem-balls", of which she can use against enemies. The chem-balls rotate through the purse using the arm strap, and are easily detachable to allow Honey Lemon to react quickly. The purse itself is orange in color, while the periodic table screen is styled in the shape of a heart—in line with Honey's sweet nature.

The purse was created as Honey Lemon's source of power against the masked villain Yokai and his army of Microbots. During the finale battle with Yokai at Krei Tech Headquarters, Honey Lemon uses the chem-purse to spark an explosion that effectively destroys a mass number of Microbots. This destroys the chem-purse, as well, but it is rebuilt by the film's finale.

Now a full-time superhero, Honey's chem-purse is rarely far behind. In "Big Roommates 2", the purse was stolen by a petty thief named Dibs, who mistook it for an ordinary purse. After tampering with it, Dibs is hit with chemical concoctions and transforms into a gooey being known as Globby. As the team never manages to recover the purse, Hiro builds a new one later in the episode.

By season two, Honey Lemon's chem-purse receives an upgrade, which converts it into a chem-ball shooting cannon.[1]

Honey receives the purse for the first time. 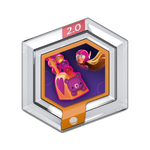