The hotel, as with other buildings in the resort, has been completely built using the feng shui technique. It draws inspiration from Disney's Grand Floridian Resort & Spa at the Walt Disney World Resort in Orlando, Florida, USA, as well as the Disneyland Hotel in the Disneyland Resort Paris.

The hotel has 400 guestrooms and a convention centre with ballrooms and function rooms. There are several kinds of guestrooms available, include garden view, sea view with balcony, and Fantasia rooms featuring a Jacuzzi in the bathroom. At the Kingdom Club level, both guestrooms and suites available: Kingdom Club rooms and Kingdom suites. Two presidential suites, namely Walt Disney Suite & Roy Disney Suite, are also located at this level.

There are four restaurants in the hotel. Enchanted Garden offers Disney character dining experience with international cuisine buffet. Crystal Lotus is a Chinese cuisine restaurant which is decorated with more than 2238 lotus. Sea Breeze Bar is located next to the outdoor pool offering European-style meals and cocktails. Grand Salon, a lobby coffee shop which offers a sea-view and is located at the entrance of the hotel.

The hotel has one shop called Kingdom Gifts located on the lobby next to the main entrance. The shop sells drinks, park merchandise, toys and T-Shirts. It is slightly Victorian-themed, like the hotel itself. 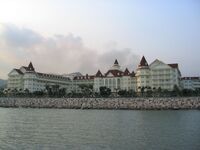 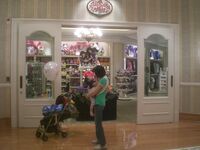 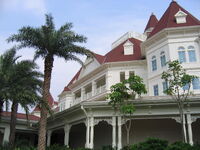 Retrieved from "https://disney.fandom.com/wiki/Hong_Kong_Disneyland_Hotel?oldid=4005746"
Community content is available under CC-BY-SA unless otherwise noted.