Ant-Man
Ant-Man and the Wasp
Avengers 4

Erased from existence by Thanos

Hope van Dyne is a character and superheroine from Marvel Comics. She is the daughter of Hank Pym and Janet van Dyne, working for Darren Cross. However, upon learning that Cross intends to sell the Yellowjacket battlesuit as a weapon, she and her father work together, recruiting reluctant thief Scott Lang to become Ant-Man in order to steal the suit. Hank would later reveal that he had made a new suit for her, allowing her to succeed her mother as the second Wasp.

She first appears in the 2015 film Ant-Man as the tritagonist, and later returns in the 2018 sequel Ant-Man and the Wasp.

When Scott Lang returned the Ant-Man suit after stealing it, Hope called the police to arrest him. However, Hank helped Lang to escape from prison. Hope later was in charge of training Lang, as she was an expert in martial arts. With the training finished, she with her father accompanied Scott to infiltrate to an old Howard Stark's warehouse. Arriving there, Lang found that the old warehouse was now a facility belonging to the Avengers. She worried about Lang but seeing the battle and seeing that he used what he learned from her, she was glad. As she, her father and Lang were discussing the final mission, Cross arrived at the Pym's residence and asked to speak to Hank. Eventually, Cross left the mansion which caused Hope worry about that Cross suspicious of her. Her suspicions were founded as Cross immediately called to tell her about his meeting with Pym. She told Scott and her father that Coss would increase security on the day of the presentation of Yellowjacket suit. Lang then asked Hank and Hope recruit his friends as they could be useful in their mission.

When Luis, Kurt, and Dave were recruited for the mission, Hope did not see fit to use them in the mission as she thought they were inexperienced. She later gave Sanax to Scott's friends after they saw the Ant-Man suit in action. The next night, Hope went to Pym Technologies to witness the presentation of Darren Cross and the Yellowjacket suit. Hope tried to reason with Cross after this one revealed his intentions to sell his suit to HYDRA and also kill Hank Pym. Despite her efforts, Cross seriously injured Hank and also Mitchell Carson managed to escape with Cross formula. The next day, Hope, Scott, and Hank discussed the successful mission and also the stay and subsequent escape of Lang from Quantum Realm. After the meeting, Lang and Hope kiss each other which caused that Pym was in a state of shock. Hank revealed to Hope that he and her mother were working on a new suit but that after her death the project was frozen. Hank and Hope then said it was time to finish that project.

Hope, carrying and donning the mantle of her mother, will appear in the fourth season of the Avengers Assemble. 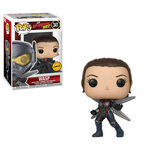 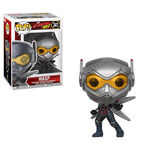 Retrieved from "https://disney.fandom.com/wiki/Hope_van_Dyne?oldid=3316028"
Community content is available under CC-BY-SA unless otherwise noted.