Each other, Their boss Major Synapse

Psychic abilities (although split between them)

Hotshot and Flygirl are two minor antagonists in Darkwing Duck. They are Major Synapse's henchmen and lackeys. They only appeared in the episode "Heavy Mental", but also had a brief appearance in the Darkwing Duck comic book.

The male Hippe, nicknamed "Hotshot", has control over fire and ice. His hair magically levitated itself and his eyes glowed keenly.

The female hippie, nicknamed "Flygirl", has control over flight and gravity.

As part of F.O.W.L.'s psychic division, Major Synapse was given a pair of unnamed hippie agents who possessed no psychic abilities whatsoever. Synapse consider them worse than useless, not even good for luaus and cocktail parties. They routinely fail to identify hidden objects even when they can pick them up and feel them.

However, when he stole the Norma Ray from Dr. Sarah Bellum's lab in the Swiss Alps, Synapse used it on the hippies, giving them real psychic powers.

They proved to be more than a match for Darkwing Duck; unfortunately, their abilities were no match for the avarice of Major Synapse. He forced Flygirl to hold a massive duck smasher (anvil) over Darkwing while he bartered for terms with F.O.W.L. high command. This delay allowed Gosalyn and Launchpad to overwhelm the two hippies with Launchpad's superior psychic abilities, ending with them smashed under the duck smasher which they were last seen limping away from.

In the 2010 comic's third arc, "F.O.W.L. Disposition", Hotshot and Flygirl appeared alongside Ammonia Pine, trying to capture Gosalyn and Honker when they sneak into F.O.W.L.'s hideout. While attacking Honker, Hotshot and Flygirl end up cutting the support ropes that were holding up a giant anvil, which promptly falls on them as a result. 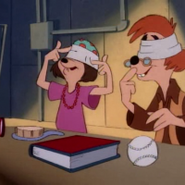 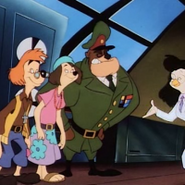 Synapse with Hotshot and Flygirl 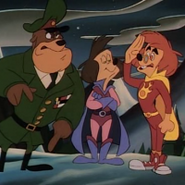 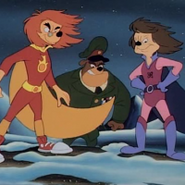 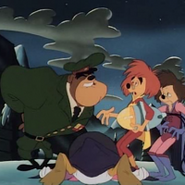 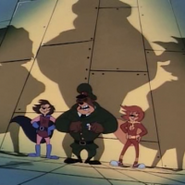 Add a photo to this gallery
Retrieved from "https://disney.fandom.com/wiki/Hotshot_and_Flygirl?oldid=3516159"
Community content is available under CC-BY-SA unless otherwise noted.