Disney Wiki
Register
Don't have an account?
Sign In
Advertisement
in: Article of the week, Television series by Disney, One Saturday Morning shows,
and 74 more
English

This article is about the television series. For the location, see House of Mouse (night club).

Rockin' at the House of Mouse

Disney's House of Mouse is an animated television series, produced by Walt Disney Television which originally aired from January 2001 to October 2003. In the series, Disney mascot Mickey and his gang of famous friends run a nightclub frequented by many other animated Disney characters from throughout the company's animation history.

The show also spawned two direct-to video films Mickey's Magical Christmas: Snowed in at the House of Mouse and Mickey's House of Villains.

Walt Disney's most famous cartoon star, Mickey Mouse and his gang of friends run a nightclub called the "House of Mouse" in the middle of Main Street from the city of Toontown, which shows Disney cartoons as part of its floor show. Each episode features a framing plot revolving around the comic mishaps of Mickey and the other characters running the club, often with cartoons that fit the theme of the framing plot, which are used as wraparounds for various Disney cartoons.

Many characters from various Disney animated films (such as Cinderella, Aladdin, Pinocchio, Peter Pan, The Lion King, Beauty And The Beast, The Little Mermaid, Hercules, Sleeping Beauty, and many more) have appeared on House of Mouse, mostly as guests and attendees. The show included many relatively obscure and otherwise rarely-used characters from the Walt Disney Company's more-obscure films, often with speaking parts; however, appearances by characters from other media (such as comic books and television shows) were few and far between.

Mickey Mouse is the club's owner and MC, while Minnie Mouse jointly manages the club's finances and show production. Other House of Mouse staff members include:

A musical band consisting of Donald Duck's troublesome nephews, Huey, Dewey, and Louie always serve as the musical guests, with such alternating names as "The Quackstreet Boys", "The Splashing Pumpkins", and Kid Duck. Mickey's arch-rival Pete is the club's greedy landlord, who often attempts to shut the club down for his own personal gain by sabotaging the show through various means, since Mickey's contract states that the club stays open "as long as the show goes on" but Mickey, the rest of the gang, and even some of the guests have managed defeat him every time he does so. The Magic Mirror from Snow White and the Seven Dwarfs has been installed in the lobby of the club, helping answer questions characters may have.

A running gag throughout the series is that Thomas O'Malley and the Alley Cats from The Aristocats are scheduled as the club's musical guests, but their acts are always cancelled.

Throughout the course of the series, Mike introduces Mickey onstage, then he demonstrates three cartoons. Also, Mike announces the sponsors in most episodes, and Mickey signs off before the credits roll.

Produced by Walt Disney Television, House of Mouse originally aired from 2001 to 2003, and ran for 52 episodes. Following from Teacher's Pet this was the second animated show from Disney to be produced in a 16:9 widescreen aspect ratio. While it was cropped for 4:3 fullscreen TVs at the time of its original airing, it was extended to 16:9 for repeats in later years

House of Mouse originally aired on the final season of the Disney's One Saturday Morning block on ABC, but was dropped after half of its episodes were shown, likely as a result of the lackluster ratings of ABC in general during the early 2000s; the remaining episodes were instead premiered on Toon Disney. It reran from September 3, 2002 to February 4, 2006 on Disney Channel. The show ceased broadcast on US television on February 6, 2009 after being aired for the last time on Toon Disney before it re-branded as Disney XD.

On British television, the show was originally repeated on Disney Channel until March 2009, at which point Disney Cinemagic took over until it was shut down on March 28, 2013. It was during this time that the show finally aired with some regularity in its 16:9 widescreen format.

The theme song, "Rockin' at the House of Mouse", was performed by Brian Setzer. 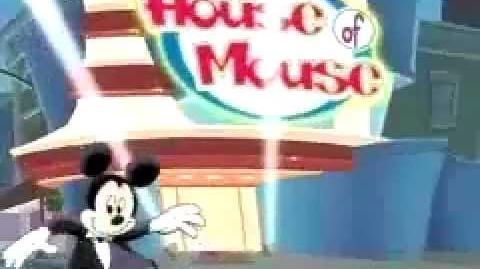 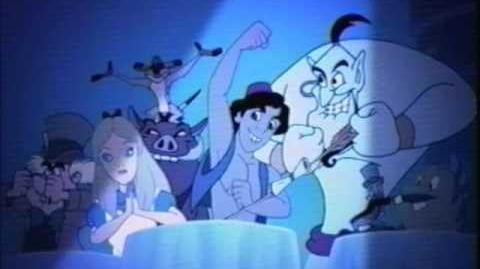 The Disney Wiki has a collection of images and media related to House of Mouse.