House of the Future

House of the Future

Sponsored by Monsanto Company, its design and construction was overseen by Monsanto, the Massachusetts Institute of Technology and Walt Disney Imagineering. It was opened on June 12, 1957 and closed in December 1967, replaced by Alpine Gardens before being transformed into the Ariel's Grotto and Pixie Hollow meet and greet attractions.

The house itself, intended as a look at future living in the year 1986, would be furnished with a variety of technologies new at the time, such as a kitchen with a microwave oven and sonic dishwasher, adjustable height sinks in the bathroom, retractable refrigeration space, touch-tone phones, and more. The house received over 435,000 visitors within the first six weeks and would see around 20 million before it finally closed after 10 years.

The House of the Future would inspire similar exhibits at other Disney parks in later years.

The RCA Home of Future Living would serve as a post-show experience to Space Mountain at the Magic Kingdom when it opened in 1975.

In February 2008, Disney announced it would conceptually bring back the attraction with a more modern and accessible interior. The $15 million Innoventions Dream Home was a collaboration of The Walt Disney Company, Microsoft, Hewlett-Packard, software maker LifeWare, and homebuilder Taylor Morrison. It too would eventually close. It had such innovations as tables with TVs integrated into them and energy-efficient LED light bulbs and appliances.

The attraction as shown inside

Floor plan from a promotional brochure 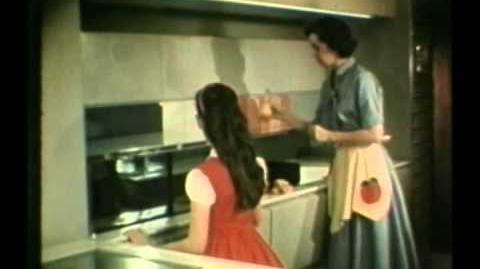