English
How to Build a Better Boy is a Disney Channel Original Movie that was released on August 15, 2014. It is directed by Paul Hoen, executive produced by Robin Schorr, executive co-produced by Dan Seligmann and written by Jason Mayland. It was based on the John Hughes film Weird Science. It features Kelli Berglund, China Anne McClain and Marshall Williams. Production began in Toronto, Canada.

Mae Hartley (Kelli Berglund) and Gabby Harrison (China Anne McClain) are super smart Tenth Graders. Their homecoming dance is coming and Mae is soon embarrassed by popular girl Neveah (Ashley Argota) when she tries to get Jaden (Noah Centineo) to go with her. She exclaims that she has a boyfriend already. Mae and Gabby try to figure out what to do. Gabby comes up with the idea to make her a boyfriend using Mae's father (Roger Bart)'s work facility.

Gabby successfully creates a robot boyfriend for Mae: Albert (Marshall Williams). Albert shows up at school and every girl becomes jealous, including Neveah. Albert soon shows Mae that he can speed read and throw/kick harder than normal humans. Bart (Mae's Brother) (Matt Shively) tells Gabby she created a robot soldier and hacked into the Pentagon to do so. But this creates a string of problems as General McFee (Ron Lea) discovers the prototype robot soldier, who happens to be Albert, has escaped and presumes he has been stolen. Mae's father tries everything he can to convince General McFee the prototype soldier will be brought back to the facility.

Meanwhile Albert shows his feelings for Mae since he is programmed to do so. He even asks her to homecoming, to which Mae eventually says yes. However, the amount of time she spends with him separates her from Gabby, who becomes concerned and sad for her best friend. Gabby tries telling Mae that Albert is a super robot, but she refuses to believe her and the two girls separate. Albert even tries out for the football team with easy success. Later at the football homecoming game, Albert is in the stands watching the game with his girlfriend when one of the football team's players are injured. The coach quickly calls for Albert as a backup and Bart and Gabby witness this. Gabby tries to stop Albert from playing the game but Mae interferes preventing her friend from stopping Albert from playing.

The United States Army soldiers, led my General McFee, arrive at the homecoming game following a power outage (caused by three Russian criminals) which shuts down Albert's programming. They capture the criminals, retrieve Albert, and then question the girls Mae and Gabby at the facility where Albert escaped.

The government officials explain how Albert will only be used for good intentions and try to convince the girls that this is for their own good. Mae is upset at the fact that she'll never see him again, and not be able to attend homecoming with him. However, in a turn of events, Albert shows up at the venue and captures the attention of the attendees. Meanwhile, the army once again shows up at the venue and prepares to capture Albert again. However, Mae's father tries to convince them to hold off the capture until the homecoming dance is over, not wanting to ruin her night.

Nevaeh tries to ruin Mae's night but is dumped by Jaden in the process. But to Nevaeh's disappointment, Mae is crowned homecoming queen. However, it's revealed that the ballot box was stuffed by the army in order to trap Albert. Nevaeh interrupts Mae's speech and attempts to convince the audience that Albert is a robotic super soldier, but Jaden thwarts her by turning her warnings into compliments. The situation is successfully resolved and Gabby, along with Bart, talk to Jaden and find out that he originally intended to ask Mae to homecoming, but wasn't brave enough to do so. Gabby also realizes that she was wrong about him.

Gabby finds Mae backstage, who is clearly upset about Albert being a machine. However, Gabby apologizes to Mae that she wasn't being fair to her about Jaden, telling her that her true intentions were to not lose her as a friend. They make up. The Army also begins to plan their next move, planning to attack as soon as Mae is kissed by Albert, which was programmed as his final mission. The Army, ironically enough, programs and designs the dance floor to be perfect for Mae (with lighting and props) due to her father's request to keep this night perfect until Albert is taken away.

Gabby sees one of the U.S. Army soldiers controlling the lights and realizes the Army is trying to capture Albert again. She watches hopelessly (as well as Jaden, who watches from the sidelines) as Mae dances with Albert and moves in to kiss him. However, she suddenly backs away and reveals that she wants a relationship with a boy that's real, not fake or perfectly manipulated like Albert. Albert is impressed by her emotional depth and tells her that she is doing something he can't, she is changing and it is beautiful. Albert and Mae hug and he points out that the army is here to take him back. He asks her to initiate his self-destruct, saying it is what he wants and Mae complies. He bids her goodbye and begins to pulsate with bright lights, nearly destroying the venue. Gabby and Mae (along with the guests) watch as Albert breaks out of the venue through the ceiling and is destroyed. Bart smartly covers and thanks the principal for the 'special effects'. The audience is convinced, and Jaden musters the courage to ask her out. She tells him she'll reply later. Mae and Gabby are thrilled over the fact that Jaden asked her out, and they dance. Meanwhile, in the sky, we see that Albert's self-destruction has caused northern lights to appear. 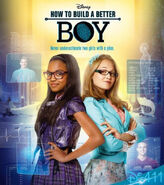 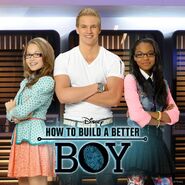 Same as picture to left, but with title inserted. 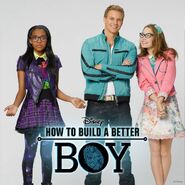