Howard Jerome "Howie" Morris was an American comic actor, voice actor, and director best known for his portrayal of Ernest T. Bass on The Andy Griffith Show, Wade on Garfield and Friends and Flem on Cartoon Network's Cow and Chicken. He did the first voice for Gopher in The Many Adventures of Winnie the Pooh. When he retired, Michael Gough took over. He also voiced Maltese de Sade in the Chip 'n Dale Rescue Rangers episode; "Le Purrfect Crime", and played Dr. Zidell in the Touchstone Pictures film, Splash. 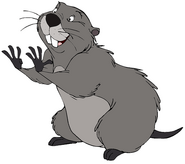