Oscar and Ava
Hugh Michael Jackman, AC is an Australian actor, producer and singer who is involved in film, musical theatre, and television and has won many worldwide recognition for his roles in major films, notably as superhero, period, and romance characters. He is well known for his role as Wolverine in the X-Men film franchise, as well for his lead roles in the films: Kate & Leopold, Van Helsing, Australia, and Les Misérables. His role in Les Misérables earned him an Academy Award for Best Actor nomination and won the Golden Globe Award for Best Actor – Motion Picture Musical or Comedy in 2013. He also voiced Roddy St. James in DreamWorks/Aardman's Flushed Away and E. Aster Bunny in DreamWorks' Rise of the Guardians.

For Disney, Jackman 1996, he played Gaston in the local broadway musical Walt Disney production of Beauty and the Beast. He also played Robert Angier in The Prestige, Charles 'Charlie' Kenton in Real Steel, and Leopold in Kate & Leopold. He was mentioned in the Liv and Maddie episode "Sing it Live!!!-a-Rooney". Additionally, he made a cameo as a masked avatar in Free Guy.

In addition, Jackman performed "The Magic of Christmas" in the 1998 rendition of Carols in the Domain with Mickey Mouse and fellow Disney characters. 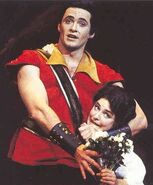 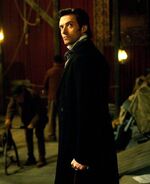