Charlie, Bill, and Rebecca
James Hugh Calum Laurie, CBE, is an English actor, voice artist, comedian, writer, musician, recording artist, director, author, and singer who is best known for his role as Dr. Gregory House in the Fox medical drama series House from 2004 to 2012. His other TV roles include George in Blackadder and Bertram "Bertie" Wooster in Jeeves and Wooster. He is also well-known for playing Mr. Little in the Stuart Little film trilogy, and voicing Dr. Cockroach in DreamWorks' Monsters vs. Aliens.

For Disney, he portrayed Jasper in the 1996 live-action remake of 101 Dalmatians, and voiced Wing Commander Gutsy in the 2005 animated film, Valiant. Additionally, he starred as David Nix in the 2015 sci-fi film, Tomorrowland. 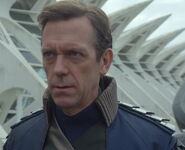 David Nix
(Tomorrowland)
Add a photo to this gallery 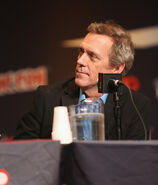 Hugh Laurie at premiere of Tomorrowland in May 2015.

Hugh Laurie at his Hollywood Walk of Fame ceremony in October 2016. 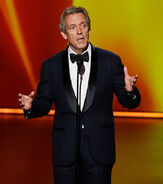 Hugh Laurie speaks at the Avenue 5 panel at the 2020 Winter TCA Tour.
Add a photo to this gallery
Retrieved from "https://disney.fandom.com/wiki/Hugh_Laurie?oldid=3978661"
Community content is available under CC-BY-SA unless otherwise noted.