Elite Hun Soldiers
The Hun Army are the murderous and bloodthirsty enemies of China and the primary antagonist group in Disney's 1998 animated feature film, Mulan. They are led by Shan Yu.

Little is known about their personalities with the exception of Shan Yu's Elite, but the Huns all share a thirst for power and murderous intent, as well as fierce loyalty to Shan Yu.

Shan Yu is the leader of the Huns. There are also a group of Huns known as the Elite Hun Soldiers.

The Huns are first seen with Shan Yu in the burning down of a village (though only the aftermath appears on-screen). In their invasion of China, the Hun Army wiped out the entire Imperial Army under General Li in (another) off-screen battle. Several Hun archers shot fire arrows at Li Shang's troops from a mountain top after Mushu accidently set off a cannon giving away the troops position (or they had possibly already spotted them before the cannon went off) the archers are killed by Shang's troops firing the cannons they managed to save either directly from the cannon explosions or they were knocked off the mountain and fell to their deaths. Almost all the Huns and all their horses were wiped out in an avalanche while they were pursuing Mulan, Shang, and his elite soldiers, including Yao, Ling, and Chien Po. However, Shan Yu and five of his Elite Hun Soldiers managed to survive, breaking out of the snow and heading to China to capture the Emperor. It is unknown what happened to them after they failed to capture the latter, though it is likely that if they survived, they were arrested, put in the dungeon for life, or executed.

In the Niki Caro remake of Mulan the Huns are replaced by the Rouran Army. They are now instead the ones who directly cause the avalanche through Mulan tricking them into firing a catapult in the direction of the mountain that triggers it.

Appearances outside of the film

In Disney's Arcade Frenzy the Huns appear in the Mu Shoot game. The player has to shoot fireworks at them to stop them reaching a village at the bottom of the mountain pass. Unlike the movie they simply run on foot instead of riding horses.

In Kingdom Hearts II, the Huns are completely absent and Shan Yu has an army of Heartless instead of them. However, Mushu still referred to Shan Yu as the leader of the Hun army, implying that the army exists or that the Heartless Shan Yu controls are actually Huns that were turned into Heartless.

In the manga adaptation of Kingdom Hearts II, the Huns are with Shan Yu, as in the movie, but also with the Heartless too. It not completely clear if the army was a mix of Heartless and Huns, or if the entire army was Huns that had been turned into Heartless and were simply disguised as their original selves, or if the entire army was Heartless disguised as Huns. Despite this, the manga implies that at least some of the Heartless were on loan from Organization XIII. The army still gets wiped out with an avalanche.

The unused crescent emblem for the Huns seen during production

The Hun army appears on the hillside.

The avalanche crashes down on the army.

The army desperately tries to escape their fate.

Mushu accidentally pulls a Hun up from the avalanche while searching for Mulan.

The buried remains of the army. 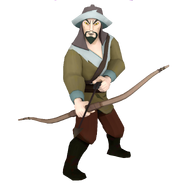