There are about eight houses in the Hundred Acre Wood. Tigger originally lived with Kanga and Roo, but was sometime given his own in The Tigger Movie. There's Pooh's house, Piglet's House, Owl's House, Rabbit's House, and Rabbit's garden, Gopher's House with a series of tunnels, Tigger's House, Eeyore's House, and Kanga and Roo's House.

In the Kingdom Hearts series, the Hundred Acre Wood is called the 100 Acre Wood. It is simply a magic book containing the world that Merlin keeps with him. In most games (with the exception of Coded, 358/2 Days, and Dream Drop Distance) it is optional, but beneficial to visit the 100 Acre Wood. It is special in both Kingdom Hearts and Kingdom Hearts II as a world within a world. When Sora enters the book, he lands on a version of the flat map of the 100 Acre Wood. Classic locations such as Winnie the Pooh and Piglet's Houses are accessible, as well as the Muddy Path and Spooky Cave, making this world one of very few to show a change of day. Each location usually harbors a mini-game with prizes which help Sora, Donald, and Goofy on their journey, although Sora is the only one that goes into this world. In Kingdom Hearts III, Sora visits via the book as well, but the only location visited within the 100 Acre Wood is Rabbit's garden.

When Merlin drops the 100 Acre Wood book while walking home, Terra picks it up and returns it to him, who says he has never seen it before. He leaves it in his house for Terra, and later invites Ventus and Aqua in to read it when they pass by. After it is returned, the three main characters can read it to unlock their hidden powers, visualized as the Honeypot Board.

Cid first gives the book to Sora to give to Merlin, who tells Sora that there is a world within the book. He mentions that Sora needs to collect Torn Pages throughout the worlds until he finds and seals the 100 Acre Wood's Keyhole. When Sora first goes into the book, he meets Winnie the Pooh, who is the only one left in the book. Along the way, he finds and makes friends with each of the 100 Acre Wood's inhabitants, with whom he plays a Christopher Robin-like role.

The 100 Acre Wood appears in Sora's second set of World Cards, and can be accessed on the seventh, eighth, ninth, or tenth floor of Castle Oblivion. When Sora enters the world, he finds Pooh all alone, and decides to go down the path with the teddy bear in order to find his lost friends. Upon going down the path, Sora and Pooh find Rabbit picking up cabbages, and get Owl's attention by having Pooh float high in the air with a bundle of balloons, brought back to the ground by Owl. Sora and Pooh find Roo in a hole after Pooh falls into it, and find Eeyore later down the path, whose tail is knocked down from a tree that Pooh, being chased by bees, runs in to. Tigger's attention is captured when Pooh is taught by Sora to bounce on tree stumps in a similar to formation to Tigger. Shortly afterwards, Sora and Pooh are bombarded by Rabbit's cabbages, which come rolling down the hill. Sora knocks the cabbages into a stack with the Keyblade, which causes Rabbit to appear. Rabbit explains that he tried rolling the cabbages down the path, since someone had broken the cart he had planned to use to bring them down. Coincidentally, it was Sora and Pooh who broke this cart. Sora and Pooh soon afterwards arrive at the end of the path, with all of Pooh's friends found. The two say their parting words, and Sora leaves to continue climbing to the top of Castle Oblivion.

When Merlin moves to Hollow Bastion, he takes the book with him. When Sora returns, he excitedly enters the book to check up on his friends. While he is greeting Pooh, he is suddenly ejected from the book as the Heartless try to steal it. During the battle to recover the book, it is damaged. Upon return, Sora finds Pooh with severe amnesia, unable to remember him and all of his other friends. Sora then goes out to find Torn Pages which slowly restore Pooh's memory of his friends while continuing his quest to find Riku and King Mickey. Shortly after fully repairing the book, Sora admits that he has to leave again, but reassures Pooh that they will always be in each other's hearts. Once all five Torn Pages have been located, the book's cover is changed to a picture of Sora and Winnie the Pooh sitting on Starry Hill together.

Merlin summons Sora to his table outside of the Le Grand Bistrot in Twilight Town, and Sora is disturbed to learn that he is missing from the picture on the cover of the Pooh storybook. Sora heads inside the book, where he discovers that his brush with the darkness in having nearly been made a vessel for Xehanort during the events of Dream Drop Distance has caused him to disappear from Pooh's heart. He assists in helping with a few tasks in Rabbit's garden, along the way meeting a new friend named Lumpy and reconnecting with the others from the 100 Acre Wood. Exiting the book, he relates to Donald, Goofy, and Merlin that he had vanished from Pooh's heart and tells Merlin that he doesn't ever want to lose his friends. Merlin tells him that he need not fret for there are always new paths between hearts. However, he feels that Sora already knows this, showing him the cover of the Pooh storybook, which has regained Sora's picture.

The hill from the Hundred Acre Wood at Sunset (closeup) in a background from the opening intro/closing credits of every season and episode plus the pilot Pooh Oughta Be In Pictures and Sing a Song with Pooh Bear (and Piglet Too).

The hill at night from the Hundred Acre Wood in a background from the opening intro/closing credits of every season and episode plus the pilot, Pooh Oughta Be In Pictures and Sing a Song with Pooh Bear (and Piglet Too).

The hill at sunset from the Hundred Acre Wood in a background from the closing credits of Season 1 of every episode only.

A sunset in the Hundred Acre Wood from "Owl's Well That Ends Well".

The Hundred Acre Wood from "Cloud, Cloud Go Away".

The Hundred Acre Wood from "What's the Score, Pooh?". 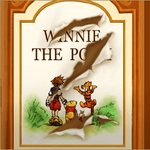 Concept art of a 100 Acre Wood room in Castle Oblivion.

The hill with a swing and a stone bridge.

Retrieved from "https://disney.fandom.com/wiki/Hundred_Acre_Wood?oldid=3880132"
Community content is available under CC-BY-SA unless otherwise noted.