Disney Wiki
Register
Don't have an account?
Sign In
Advertisement
in: Characters, The Owl House characters, Males,
and 12 more
English

Being looked down upon, failing

Emperor Belos (uncle)
Hunter (also known as The Golden Guard) is a recurring antagonist in the second season of the animated series The Owl House. He is the nephew and right-hand man of Emperor Belos.

Hunter is laid-back, easy-going, chill, and likes to make quips towards the people he battles with. He is also shown to have an endearing side, taking a liking towards King for his cute nature. In spite of this, he takes his job seriously and always makes sure to follow his boss's orders. He might be quite arrogant and obnoxious as Lilith calls him "a brat." He is apparently a "genius teen prodigy" among the members of the Emperor's Coven, implying him to be intelligent and resourceful at magic, which serves as the reason for his high rank despite his age.

However, a hidden side of Hunter was revealed in "Hunting Palismen", in which he has been revealed as not only a naturally powerless witch, but also the nephew of Emperor Belos. He is similar to Lilith, being very loyal to Emperor Belos and has some fear of his uncle, but unlike Belos' other employed, Hunter does genuinely care about his uncle, who, according to them both, took Hunter in when their family was apparently destroyed by wild magic. While he does retain fear of his uncle, he does not seem to fear Belos in his monster state and even attempts to sway Belos on a more effective way of harnessing the palisman magic. This also reveals Hunter has an interest in wild magic, having studied it quite thoroughly to the point of knowing some of the ways witches used to do magic back in the Savage Ages, although Belos seems to heavily disapprove of this interest. Outside his connection with Belos, Hunter showcases insecurity and bitterness about being a powerless witch, as he relies solely on his artificial magical staff, causing him to act a little harshly and defensive at times, especially towards Luz, his enemy. However, he gradually warms up to her, even revealing his name later on. While he is indeed her enemy, he is not above trying to help her after she helped him as thanks. After getting to know Luz, help each other out and even listening to Luz criticizes him for what he is willing to do to innocent Palismens for the sake of Emperor Belos, Hunter have some respect for Luz by letting her escape with the palismens while holding off Kikimora and when he tells Belos someone went in his way, he does not tell who it was.

In "Eclipse Lake", it is revealed that his loyalty to Belos comes to as an almost obsessive degree, as Belos tells him in his life everyone in existence have a use and his own usefulness will come when the time is right. Hunter believes that if he himself can't be useful, he considers himself "worthless". This obsession has affected Hunter's mental health, as he has a mental breakdown for a moment when Hunter feels he failed again. Hunter seems to listen to Amity's words that he does not have to think everything is an opportunity to justify existing when there are people out there who will not make you feel worthless and not want anything from you as they like you for who you are, and all he has to do is let himself meet them as she offers her hand. However, he chooses his belief as he sees the portal key around Amity's neck. After the fight Hunter went as far as using dirty tricks by threatening to harm Luz if she doesn't surrender the key, after Hunter got the portal key he does show genuine gratitude, compassion and some remorse about this before leaving. Despite getting the portal key with titan blood, Hunter does not look happy because of his actions for this after what Amity told him, Hunter officially bonds with his palisman as they leave.

Hunter is an adolescent witch with fair skin, pointy ears, dark magenta eyes, thick black eyebrows, a gap between his front teeth, bags under his eyes, and ash-blond hair that is shaved below the top with a long, jagged forelock. He has a notch on his left ear and scars on his right cheek, upper left arm, and legs.

Revealing his backstory to Luz

Working with Luz to retrieve the Palismen

"My name is Hunter."

He gets his own palisman 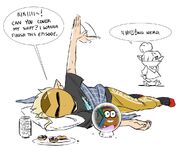