Separatists, being treated differently, Galactic Empire, leaving his squad behind, Omega in danger

Hunter is a genetically defective clone of Jango Fett and the leader of Clone Force 99, also known as the Bad Batch, a squad of clone commandos who each bore genetic mutations where Hunter possessed great tracking abilities.

Hunter first appears in meeting with Anakin Skywalker, Captain Rex, and Commander Cody. Hunter and his squad are assigned to help Anakin and his clone forces retakes the Anaxes from the Separatist forces.

Hunter first appears meeting with Jedi master Depa Billaba and her Padawan Caleb Dume on the planet Kaller. He and his squad take Caleb with them to take out some Separatist forces as they hear the Clone Wars is coming to end.

The Bad Batch witnesses the activation of Order 66. 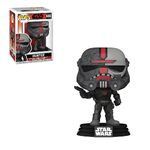