To have someone to belong to.

Causing trouble, being popular on the internet

Being interrupted by others, killing the puppies

"Good work, Cuddles. You've been busy. You have found me Dalmatians... so many Dalmatians..."
Hunter De Vil is the chief antagonist in 101 Dalmatian Street. He is the great-nephew of Cruella De Vil with a fascination with Dalmatians. He's full of schemes to get popular on the internet, and finds that his best bet is taking pictures of cute animals.[1]

Hunter is a young boy with pale blond hair that has a curly tuft on top, a red jacket over a white collared shirt with a black tie, black pants, black leather fingerless gloves, and red tennis shoes.

By the time of spending 6 months in the container, his hair has grown longer.

At first, Hunter appears to be friendly, cool, and confident that originally wants to befriend the Dalmatian pups. However, he later reveals to be mischievous, cunning, sneaky, cruel, and deceitful. At a coffee shop, he tripped a waiter as part of a prank and laughs at him.

For his age, Hunter is intelligent and full of schemes. He masterminded vandalizing the park to get recorded footage of the Dalmatians. He also won a competition to hang around Triple-D to get into the studio so he could get a hair sample from Dallas to see if the DNA matches Pongo and Perdita's. He is also able to deduce Da Vinci's art trending and figures out it's one of the dogs. This lead to figuring out where the Dalmatians live. Hunter even had a device to capture all the puppies in a large vacuum.

Due to his intelligence, Hunter can be quite overconfident. As when he was able to capture almost all the puppies he was about to deliver to Cruella, Dylan and Dolly said the puppies' trigger word that with their combined strength they were able to break out of the container and trap Hunter instead.

After being trapped for six months as revealed in "Dante's Inferno", Hunter's mental state has been affected where he acts like a dog at random occasions. He also became more determined, deranged, and by far, vengeful against the Dalmatians for trapping him in the container. However, Hunter's condition provided instances to get distracted, like with getting distracted by a stick Dylan had to defend himself, belly rubs, and chew toys. He also chased Cuddles like one after he betrayed him.

Initially, Hunter was loyal to his great-aunt Cruella, who happens to be the real mastermind behind Hunter's schemes, and he wanted to capture the dogs for her. She happens to be abusive towards him, which is why Hunter did all this so she would notice him. However, it's later revealed in "The De Vil Wears Puppies" that Hunter realizes Cruella's true intentions of killing the puppies to make fur coats, showing Hunter was oblivious to his great-aunt's schemes and true nature. When trapped in the container with the angry puppies, Hunter apologizes to them and reveals Cruella hasn't called her once when he spent 6 months in a container. Hunter is actually sensitive and a loner, he only went along with Cruella because he was alone and wanted to belong to someone. He also revealed he was fascinated with the Dalmatians because they are a family. The only one he took comfort with was his cat, Cuddles, who the latter betrayed him once he was thrown in there with the puppies.

After Hunter escaped with the distraction of the canal crew, Hunter shows kindness and bravery. He saved Dorothy from being in Cruella's hands and stood up to her by literally barking in her face that causes to fall into her own machine. After bidding farewell to the Dalmatians and Cruella arrested, Hunter chased Cuddles like a dog as punishment for leaving him.

For most of his earliest appearances, Hunter is mainly seen as a Background character. In "Dog's Best Friend", Dizzy & Dee Dee were searching for a human to adopt at "the pet shop" (a coffee shop). Upon seeing Hunter, who was relaxing and drinking juice before deciding to trip the waiter as part of a cruel prank and laughing at him, both pups could sense something off about him and wisely decided he would not make a good pet.

He is seen in "Girls' Day Out", hiding up a post, when the Camden residents mistake Delilah and Dolly for hyenas.

He appears in "The Woof Factor", where he is seen pushing his way to the front of a crowd of Triple-D's fans. He tries to get past the velvet rope, but security keeps him back.

He makes his first prominent appearance in "The Nose Job", where he is revealed to be the mastermind behind the vandalizing of the park. It is also revealed that he has a hairless cat called Cuddles, whom he is sending out to record footage of the Dalmatians.

In "A Date with Destiny...Dallas and Déjà Vu", Hunter has won a competition that lets him hang around Triple-D in the studio for the day. Hunter uses the Day in the Studio as an opportunity to get a hair sample from Dallas to see if it matches Pongo and Perdita's DNA. He gets a phone call during the episode, with this being the first episode to suggest that he is not the true mastermind but is actually working for some one else.

In "Doggy Da Vinci", he begins seeing Da Vinci's art trending on the Internet, and is able to deduce it's one of the Dalmatians. He and Cuddles search for Da Vinci, and the events of the episode lead to Hunter learning where the Dalmatians live.

In "London, We Have a Problem", he befriends Dylan with their shared love for space. But it turns out only to be part of his plan to be allowed into the Dalmatians' home, where he proceeded to kidnap the puppies, save for Dylan and Dolly. When the puppies were rescued, he ended up in the shipping container meant for them and called his great-aunt Cruella to get him out.

He is eventually able to get out of the container in "Dante's Inferno", after being trapped in there for six months. However, that much time in there has affected his mental state, causing him to act like a dog at random instances. It is also officially confirmed that he can understand canine language when he is able to catch Dante. When he confronts Dolly & Dylan, he almost captures them, but gets distracted by a stick which Dylan grabbed to defend himself, allowing Dolly & Dylan to trap Hunter in a trash can and roll him down the street.

In "Better The De Vil You Know", Dizzy & Dee Dee appear to have taken a liking to Hunter, calling him "Mister Funny-Face". It also reveals, in the six months he was trapped in the container, Cruella did not call Hunter once. It also shows that Cruella is abusive towards Hunter, with Hunter's motivation being that he wants Cruella to notice him. He makes numerous attempts to capture the Dalmatians, but fails each time. He then gets a plan to hijack the Bus, which the Dalmatians are planning on using to evacuate to the country, using a hazmat suit to disguise his scent from Diesel. He is, however, foiled when Dylan, realizing his canine tendencies, distracts him with a belly rub and a chew toy, which he chases down the street. He is later cornered by Cruella, who plans to deal with the Dalmatians herself!

In "The De Vil Wears Puppies", the Dalmatians do not fear Hunter, thinking of him as a goofball. But he begins working with his great-aunt Cruella, as they lay siege to 101 Dalmatian Street. Hunter is able to pump hot air into the house to turn up the heat, as well as cut off the Dalmatians' water, and is able to cancel out the "World Wide Woof" by using a dog whistle. While trying to cut off the Dalmatians' food, Hunter gets distracted and begins chasing the postman through the park. During this chase, he finds the tunnel which Diesel dug and that Dizzy & Dee-Dee have crawled through it. Hunter is able to use their naive nature to get them to open the door to the House, allowing Cruella in. He is then able to catch Delilah in a net.

When the Dalmatians are delivered to the harbor, Hunter overhears that once they're in international waters, they'll dump the remains. This is when Hunter realizes that the Dalmatians would need to be killed in order to get their fur, making him see Cruella as the monster she is. She throws him in the cargo container with the rest of the pups with Cuddles cowardly siding with Cruella. In the cargo container, Hunter apologizes to them, admitting that he was only helping Cruella because he is alone in the world and just wanted to belong to someone, but sees the bond the Dalmatian family have with each other. Hunter is imprisoned in a cage with the other Dalmatians, but is able to escape when the canal crew distract Cruella, and lets the other puppies out of their cages as well. He then throws Cuddles overboard. During the battle, Dorothy is cornered, but Hunter picks her up. Cruella orders him to hand Dorothy to her, but Hunter finally stands up to Cruella and barks at her, causing her to fall into her own fur machine. Cruella is soon arrested, and the Dalmatians head home, with Hunter chasing after Cuddles like a dog, presumably to reprimand his pet for not helping him escape the crate.

Hunter watches recorded footage of the Dalmatian family in his private limo. 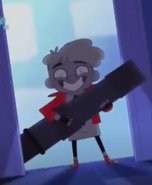 If he doesn't scare you, no evil thing will!

Foiled by the pups, Hunter gets locked in the shipping crate the puppies were supposed to be in.

"You're gonna KILL them!"

Retrieved from "https://disney.fandom.com/wiki/Hunter_De_Vil?oldid=4311777"
Community content is available under CC-BY-SA unless otherwise noted.