This article is about the creature from Hercules. For the organization set in Marvel Comics, see HYDRA.

A canyon near Thebes

Killed after getting buried under an rockslide caused by Hercules

“Will you forget the head-slicing thing!”
―Phil during Hercules's fight with the Hydra

The Hydra is a large, multi-headed serpent appearing in Disney's 1997 feature film, Hercules. In the film, the Hydra is the first monster Hades uses to destroy Hercules, though Hercules manages to defeat it, earning him fame and adoration from the citizens of Thebes.

The Hydra is a massive, dragon-like reptilian creature with dark purple scaly skin. Its snake-like body is rather bulky and it crawls using two forearms with four-fingered hands that have claws. It has a long, thin tail and each time one of its heads gets cut off, 3 more grow to replace it. Its number of heads can apparently grow exponentially up to at least 18 in Hercules, though in Kingdom Hearts II its maximum is seven and in the read-along story it was 30. All of the Hydra’s heads are identical to each other, each resembles a cross between a rattlesnake's and a monkey's, a large mouth filled with white fangs and long snake-like tongue, orange eyes with slit pupils, and spikes lining the top of their heads down the length of their long, serpentine necks.

The Hydra is the first obstacle sent by Hades to kill Hercules. Lured to a canyon outside of Thebes, Hercules unknowingly releases the Hydra from a cave after rescuing two children (Pain and Panic in disguise) from under a boulder. The two thank Hercules before running off to Hades and leaving the hero to feel a false sense of accomplishment, oblivious to the unintended consequences that would come of his actions.

Moments later, Phil joins Hercules in the canyon, and they become aware of a hissing sound. The Hydra surprises Hercules by approaching him from the inside of the cave, forcing the hero into combat. The monster lunges at Hercules, but he dodges the serpent and keeps her at bay, until the monster strikes and knocks him back. Realizing he lost his sword, Hercules defenestrates the beast by hurling a boulder at her, only for the Hydra to crush it into stones with her teeth and laughs at the hero's clumsy attempts. When the Hydra next strikes, Hercules grabs the monster's teeth, struggling as he is pushed back by the creature. He slams her head into the ground, giving him time to grab his sword. However, the Hydra lashes out with her tongue and catches Hercules by his ankle. She flips him into the air, and swallows him whole. Satisfied, the Hydra lets out a loud burp and licks her lips. The Hydra is about to attack the people of Thebes until a sick look spreads across her face. While in the monster's throat, Hercules cuts his way out by decapitation with his sword from the inside-out. The huge head tears from the body and lands in the middle of the crowd. Standing next to the Hydra's headless steaming carcass, the hero is again lured into a false sense of security before, as Hades expects to happen.

An eerie hiss wheezes from the Hydra's wound, as three separate writhing heads sprout from the wound, admiring each other before beginning the rematch. The now three-headed monster chases down Hercules around the canyon until Pegasus picks up Hercules just as he's about to be bitten. Together they soar into the sky as the hero fights back, to little avail. With each head Hercules slices off, three more grow in its place (to the point that they start sprouting four and even five heads at a time). Frantically, Hercules chops at the hideous monster, continuing until he is surrounded by a hissing swarm of heads. Hercules and Pegasus fly up to avoid a pair of heads (which crash into each other), when suddenly another head strikes Hercules, knocking him off Pegasus, and he falls into the living jungle of Hydra necks, as the snarling heads gang up to attack him. Hercules barely makes it through until he is flung into the air, and is pinned a cliff with the sharp talons of the Hydra's foot. All of the monster's heads lick their slimy lips, ready for the final attack, as they are about to finish the young hero off. As all heads lung at once, Hercules quickly punches the cliff, which causes an avalanche of rocks to fall. The Hydra freezes as all of her heads look up in fear, then the Hydra is crushed and buried in a mountain of rocks, ultimately defeating her for good.

All that is seen of the Hydra after the rockslide is her claw (where Hercules was held). Everyone in the crowd, including Pegasus, Phil, Meg, and Hades thinks that Hercules had died with the beast; however, all a sudden the Hydra's claw starts moving. The crowd is afraid at first, thinking the beast is still alive. But once the claw opens, it is revealed to be none other than Hercules who survived, and everyone starts shouting for Hercules as the light shines on a new hero.

During the song Zero to Hero, everyone is watching a play featuring Hercules bravely fighting the Hydra in battle. Unlike the actual battle, the play shows Hercules fighting the three-headed Hydra, with Phil behind him and not running away.

The Hydra only made minor appearance in the series. In the episode "Hercules and the Parent's Weekend" The Hydra appears as a baby during Echidna song "What's a Mother To Do?" with the rest of her monstrous children.

In "Hercules and the Arabian Night", after meeting Jafar for the first time, Hades thinks about where he can put the Hydra, holding a little chess piece figure of the Hydra in this sequence.

In "Hercules and the First Day of School", the Hydra head was seen in the museum.

In "Hercules and the Gorgon", the Hydra is invited by Pain and Panic to the orientation in the Underworld.

In "Hercules and the Spartan Experience", while looking at clouds with Icarus and Cassandra, Hercules pointed at a cloud that he thought looks like a Hydra being slain by a brave hero.

In "Hercules and the Long Nightmare", Phantasos creates a discomforting quilt to make everyone have bad or scary dreams and frame his brother, Morpheus. Hercules had a dream when his adult self visits Zeus and Hera on Mount Olympus, and a three-headed Hydra appeared. One Hydra head grabs Hercules by his cape, dangling him while the other two snapped at him. Phil had a dream until it was interrupted by witnessing Herc's dream, seeing Herc attacked by the Hydra but the hero couldn't fight back because he dropped his sword. When talking of the scary dream, Phil pointed out it was he skipped sword practice to watch cheerleader tryouts at school. The next night, Hercules dreamed of his teenage self being grabbed by the Hydra. He screams for help before the Hydra swallowed him whole. The Hydra's three heads turn into faces of Phantasos afterwards. Hercules continues having the dream, saying he couldn't get out and was stuck in its pancreas, before waking up. When Morpheus asks for Hercules's help, Hercules mentioned how the Hydra was "as scary as they come". Both Hercules and Phil once again face Phantasos, who transforms into the Hydra. Proclaiming he's no longer afraid and Phil's advice that it's just a dream, Hercules bravely tricks the monster, tying the Hydra's necks, then he grabs the tail, spins it around, and throws the monster into a hole before Phantasos turns into Typhon, the father of all monsters. After stopping Phantasos, Hercules told Morpheus that because of the dreams, he wouldn't be afraid if he ever faced a real Hydra, that tackling it in his dreams made it less frightening.

The Hydra appears briefly in the Philoctetes' Hero-Training Program advertisement at the end of the episode "Salute To Sports". It had three heads and was facing Donald Duck in the canyon outside of Thebes.

The Hydra is mentioned by Zeus when viewing the Hall of Trophies. Zeus describes a different fight that Hercules had against the Hydra, instead saying that it had nine heads to begin with, with Herc searing its heads off so that they wouldn't regrow. This description is identical to the original myth where Hercules and his nephew Iolaus worked together to slay the Hydra, by having Hercules chop off a head and Iolaus cauterize the neck before it could regrow two more. One of its heads appears in statue form. 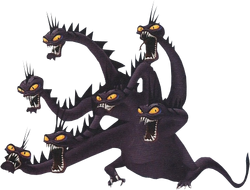 The Hydra appears in Kingdom Hearts II as a boss at Olympus Coliseum. Sora must battle with the help of Megara, Phil, and Pegasus to defeat it.

Hades sent the Hydra to destroy the Olympus Coliseum and kill Hercules. Hercules had to fight it in the Coliseum and believed he had knock it out. However, it was in fact playing dead and started to destroy the Coliseum. Sora then fought it with his friends and beheaded it until it could no longer grow heads. However, the aftermath of the battle was rather unfavorable—the Coliseum was destroyed and Hercules lost his hero's glow, making him later fall prey to the plans of Hades.

Despite not having too many live appearances, the Hydra has appeared in several spots, such as the Disney theme parks along with other characters from Disney's Hercules at Disney MGM Studios.

The Disney Wiki has a collection of images and media related to Hydra.

Retrieved from "https://disney.fandom.com/wiki/Hydra?oldid=4288501"
Community content is available under CC-BY-SA unless otherwise noted.