Water
Hydro-Man is a character from Marvel Comics that appears in Spider-Man: Far From Home as a member of the Elementals.

When Spider-Man, Kid Arachnid, Iron Spider, and Scarlet Spider answer a distress signal at an abandoned mall in Queens, they find a vacuum-sealed room where Hydro-Man is being held. Hydro-Man claimed that Nick Fury was keeping him in this hideout for his own protection, and they decide to bring him to the Triskelion. However, when Iron Spider looks up Hydro-Man's criminal record and found out that he is a villain, Hydro-Man sheds his charade and attacks the group, causing Iron Spider to do an emergency landing in the Queens neighborhood where Aunt May resides. In order to combat Hydro-Man, Spider-Man, Kid Arachnid, Iron Spider, and Scarlet Spider had to use freeze webs until they ran out. As a final plan, Spider-Man has his fellow spiders throw their web cartridges into Hydro-Man, which caused the released webbing to absorb Hydro-Man. Back at the Triskelion, Spider-Man receives word that the jet carrying Hydro-Man back to his prison got intercepted. This causes Spider-Man to suspect that Doctor Octopus was behind it and now has a possible candidate for the Sinister Six. This was confirmed in "The New Sinister 6" Pt. 1 where Hydro-Man appears as a member of Doctor Octopus' Sinister Six. He is shown sporting a new outfit (similar to the second outfit from the comics). During the attack on the Triskelion, Cloak uses his abilities to send Hydro-Man to the middle of the Atlantic Ocean. Hydro-Man returns where he causes a tidal wave on the Triskelion and then forms a waterspout around it.

In the Marvel Cinematic Universe, Hydro-Man is reimagined as a robotic monster created by Mysterio, who is controlling the Elementals to appear to the public as a hero and successor to the late Iron Man. It attacks Venice, Italy, where Peter Parker and his classmates are having a vacation. Though Peter tries to ward it off, Mysterio eventually arrives and defeats it. 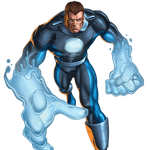