IG-88 is an assassin droid bounty hunter in the Star Wars Universe. He is hired by Darth Vader to capture Han Solo and also is the chief rival of Boba Fett.

The Empire Strikes Back

IG-88 is summoned aboard the Executor-class Star Dreadnought Executor by Darth Vader in his search for the Millennium Falcon.

Later, IG-88 pursued Princess Leia Organa on Garel, seeking a data-tape in her possession of Imperial base locations. Organa was assisted by Sabine Wren, who identified the droid, and the pair fled as the assassin opened fire in the corridors of Garel City Spaceport. However, Wren planted a paint bomb, surprising IG-88, and covering him in purple paint. Leia convinced several stormtroopers to fire at the bounty hunter, and the droid was hit by a blast before retreating. 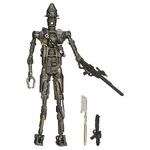 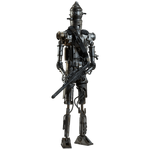