I Didn't Do It

I Didn't Do It

Time of Our Lives by Olivia Holt

I Didn't Do It is an American teen sitcom that originally aired on Disney Channel from January 17, 2014 until October 16, 2015. The series was created by Tod Himmel and Josh Silverstein and stared Olivia Holt, Austin North, Piper Curda, Peyton Clark, and Sarah Gilman.

The series follows brother-sister twins Lindy and Logan Watson and their three best friends, Jasmine, Garrett, and Delia, as they begin their freshman year of high school at Ditka High. In the first season, each episode began with a comedic "what just happened" situation followed by the story being told in flashbacks. This concept was abandoned in the second season. 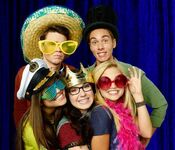