Collecting butterflies, spending time with Tarzan, being like Tarzan

Danger, being told what he can and cannot do

Returns home with his aunt and is given a rare type of Butterfly by Tarzan
Ian is Dr. Doyle's shy and insecure nephew. She brings him with her when she comes back to Africa to spend time with Archimedes Q. Porter. Tarzan keeps Ian entertained while the two elderly scientists spent time together, and during that time, Ian began to watch what Tarzan did and learned to imitate him, giving him a new sense of confidence.

Unfortunately, things get out of hand, when Ian found himself attacked by various animals, which made his Aunt very upset. An argument ensued afterwards, and the result was Ian running off into the jungle. Eventually, he found Manu and chased after him, inadvertently disturbing the baboons in the process. He tries to deal with them the way Tarzan would have, but to no avail. After they laughed, they then chase after him until he is finally cornered at the edge of a cliff. But thankfully, Tarzan arrives to help him just in time. Ian goes back home afterwards, and is given a blue butterfly as gift from Tarzan. 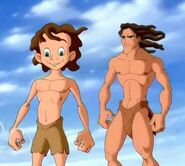 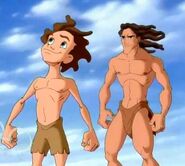 Retrieved from "https://disney.fandom.com/wiki/Ian?oldid=4141218"
Community content is available under CC-BY-SA unless otherwise noted.