Hanging out with his brother, his family, having talks about his father, cake, magic, making friends, trying new things

"No, it’s garbage for the trash can. And you left the lid off!… Oh! Ugh!"
"I think with a little bit of magic in your life, you can do anything."
"It’s not a quest. It’s just a really fast and strange errand."
Ian Lightfoot is an elf who serves as the protagonist of the 2020 Disney•Pixar animated feature film, Onward.

Ian has a kind, caring personality where he loves both his mother and brother. However, as a result of not knowing his father at a young age, Ian developed an awkward personality where he was afraid to try almost everything. This led Ian to be unconfident in his capabilities to do anything, despite him striving to be like his father whom he admired so much.

Despite loving his brother Barley who was his polar opposite, Ian was secretly annoyed with his brother's antics and had a hard time going along with Barley and his ideas. However, over the course of their journey, Ian's bond with Barley grew stronger and realized that although he may never knew his father, Barley was the one who helped and guided Ian throughout his life.

After the brothers' adventure, Ian became more confident and social where he made new friends, accepted his mother's new boyfriend (who he despised in the beginning) and spent more time with his older brother.

Ultimately, his yearning for his father, while understandable, led to the development of his greatest flaw, which is his lack of appreciation for the worthwhile things he already had. His other shortcomings stem from this core trait, from the somewhat distant, if loving, relationship with his brother and mother, to his low self-esteem and social anxiety. In the end, it was by letting go of his father and the expectation that he had to be like him that he grew into his own.

Ian is a 16-year-old blue elf with dark blue fuzzy hair, brown eyes, and pale pointy elf ears. He wears a plaid red long-sleeved shirt with old blue jeans and blue sneakers. Ian also bears a resemblance to his late father, Wilden Lightfoot as he has his father's nose, hair, and skinny physique.

Ian, along with his brother Barley, first appears at the beginning of the film where the elf brothers live at New Mushroomton, wearing a Willowdale College sweatshirt. During his lifetime while he leaves off to get food for himself at Burger Shire, he encounters a fellow elf named "Gaxton" who realizes that the sweatshirt he is wearing once belonged to his father before he passed away. After a good conversation with Gaxton, Ian gets his order from Burger Shire and writes a list of hobbies to do during his new life in high school where he learns to be courteous of over student creatures such as a troll named ”Gorgamon". However, after class ends, Ian rides a taxi teaching students how to drive while Ian's driving instructor, a gremlin, teaches him how to drive to which he has trouble concentrating on the freeway. Back at school, Ian sheepishly tells his classmates to join him for his party at his house to which his conversation with his colleagues was not successful due to Barley interrupting while Ian bids his colleagues a farewell just as Barley takes Ian home.

Back at home, Laurel gives a surprise party for Ian and Barley during Ian's sixteenth birthday. On his sixteenth birthday, Ian and his brother Barley receive gifts from Laurel which are his father's magical staff, a Phoenix Gem, and a letter that gives instructions to use a Visitation Spell. Ian then uses the spell accidentally to resurrect his late father, but only half of his body is shown, leaving it incomplete as the gem disintegrates due to Barley's interruption. He and Barley go on a quest to find another Phoenix Gem in order to complete his plan to revive his father.

Ian and Barley later gaze upon the half-restored Wilden Lightfoot to which Barley explains that the spell he used to revive his father only lasts for one day at sunset. In a plan to find another Phoenix Gem, he explains to Ian that the Manticore's Tavern is the place where all the quests begin, which would be the only place to find the Phoenix Gem. The brothers plan to start their quest via riding on their van Guinevere in a plan to arrive at the Manticore's Tavern. Barley then introduces his van Guinevere to his father and then tells Ian to practice using magic in order to revive his father just as the elf brothers continue their journey to the Manticore's Tavern where they encounter Corey who would help the elves find the gem. Corey, however, refuses to at first since according to her, she quit her jobs going on adventures. When she remembers the quote she sees in the tavern due to Ian's despondency with Corey routining her job, she drives the customers away but accidentally sets the tavern on fire just as the brothers argue over the map that ultimately gets destroyed during the fire. Upon escaping, the only surviving clue Ian and Barley obtained during the fire was a kid's menu from the tavern to which the clue is linked to the Phoenix Gem at Raven's Point.

On their way to the mountains of Raven's Point, Ian and Barley run out of gas for their van so they go to the Swamp Gas area to get their fuel refilled to continue their quest after the plan to enlarge the gas can and the fuel inside was a failure, due to Barley's diminutive size. Arriving at the mart, Ian buys a refill for Guinevere but due to Barley being impatient, he adds Cheese Puffs and a bathroom key while requesting the cashier, increasing the cost. Just as Ian and his father leave the mart, he notices Barley arguing with Dewdrop to which after accidentally knocking down the motorcycles parked at the mart, the two are chased by a gang of hostile motorcycle fairies known as the Pixie Dusters. Due to Barley's diminutive size, Ian is forced to drive Guinevere by himself just as Barley instructs him to start the van's engines as the Pixie Dusters chase them across the freeway. Throughout the chase, Ian and Barley (now in his full size) are able to escape from the group of fairies; however, the police officers Specter and Gore notice their van passing through them. To avoid getting arrested, Ian and Barley disguise themselves as Colt Bronco in order to avoid getting arrested by the police to which they are able to do so by distracting them by telling the truth. Barley and Ian then stop to get some Elixir energy drink from a soda machine to which Ian and Barley argue with each other about the things the elf brothers did wrong earlier to which their argument is interrupted when Ian and Barley dance with their father with the music playing in Barley's van. The two manage to get back on their van to continue their quest.

Finally on their way to the Phoenix Gem, Barley explains to Ian about the dangers in the area to which they come across an enormous chasm where they see an ancient drawbridge known as the "Trust Bridge" where Barley tells Ian to use a spell to help Ian activate the lever on the side of the drawbridge. Ian manages to activate the lever to lower the drawbridge to which the two finally arrive at Raven's Point to continue their journey. However, Colt Bronco prepares to arrest the elf brothers for reckless driving just as Ian and Barley escape via Guinevere to get to Raven's Point. However, noticing the police squadron is preparing to arrest the two, Barley sacrifices the elf brothers' van to block the police squadron's view. On their way, Colt follows them and tells them that they will be arrested for breaking the law to which they are able to avoid getting arrested to which Ian and Barley sacrifice their van in order to avoid getting arrested by Colt and his police squad, causing debris to fall on their path. Ian and Barley manage to enter a cave at Raven's Point.

Ian, Barley, and their father continue their journey to find the Phoenix Gem at Raven's Point where the elf brothers and their father proceed to a cave at Raven's Point where they discover a prophecy of magic on a wall. Using a Cheese Puff to enlarge it and use it for transportation, the two arrive in a dark chamber leading to a gauntlet of obstacles after passing through a hall of wizard statues.

Arriving there, the two manage to survive the gauntlet and reach the top of the mountain, only to find out the brothers are at New Mushroomton again. Ian and Barley argue over their quest which led to nothing as they could not find the gem, leading Ian to spend the last moments with his late father before sunset. As Ian spends time with his father, he remembers the moments he had when he was still young along with Barley based on the things he wrote on his notes. Barley, however, manages to insert a flower-shaped piece into the fountain he was attempting to defend earlier, which causes a Phoenix Gem to emerge and unleash a curse that summons a dragon. Ian and Barley notice the dragon sculpture fighting them to which during battle, Ian loses the wizard staff as it gets knocked into the ocean. However, he receives a replacement of it through a splinter as he continues to use it to complete the full body of his late father.

Corey and Laurel fight off the Curse Dragon just as Ian gets a chance to continue reviving his late father, finally completing this quest before sunset while Laurel helps Ian use magic on the Curse Crusher to destroy the dragon. With the dragon destroyed, Barley spends his last moments with his father just before he passes away once again. Barley then congratulates Ian that his father is proud of him for bringing back magic once again to the modern society.

During the epilogue when magic is brought back to the land of mythical creatures, Ian tells his class about what he did to repair the school after it was destroyed by the curse to which Ian's colleagues are excited about the lesson he taught them. When Ian returns home to see Laurel and Blazey happy to see him back, Ian paints a new van called "Guinevere 2" where he and Barley continue quests with the magic restored back in the land of mythical creatures.

Ian and Barley as they appear at the Disney Parks. 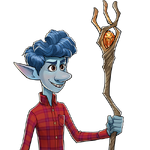 Ian in Disney Magic Kingdoms
Add a photo to this gallery

The Disney Wiki has an article focusing on the relationships of Ian Lightfoot.

Retrieved from "https://disney.fandom.com/wiki/Ian_Lightfoot?oldid=4306221"
Community content is available under CC-BY-SA unless otherwise noted.