1968-present
Ian McDiarmid is a Scottish actor and theatre director, who has also made sporadic appearances on television, and appeared in 47 films since 1976. Internationally, he is perhaps most famous for his role as Emperor Palpatine/Darth Sidious in the Star Wars saga, which he reprised in The Rise of Skywalker, the final installment in the Star Wars sequel trilogy. He also played Brother Jacobus in Dragonslayer and Ambrose in Restoration. 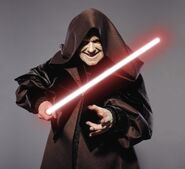 Brother Jacobus
(Dragonslayer)
Add a photo to this gallery
Retrieved from "https://disney.fandom.com/wiki/Ian_McDiarmid?oldid=3874098"
Community content is available under CC-BY-SA unless otherwise noted.