He is generally identified as the alligator in the park's backstory that was seen sliding down the slopes of the hastily built and thawing ski-resort that resulted in it being repurposed as a water park. He and his unnamed niece (who appears in statue form at the Tike's Peak kids area) have been playing on the slopes ever since.

His popularity led to the creation of a Typhoon Lagoon counterpart named Lagoona Gator. 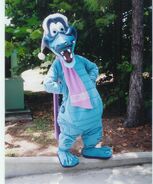 Ice Gator walk-around character.
Add a photo to this gallery