Disney Wiki
Register
Don't have an account?
Sign In
Advertisement
in: Characters, Jake and the Never Land Pirates characters, Disney characters,
and 7 more

Guardian of the path of the Blue Ice Diamond

Being disturbed from his slumber, trespassers, Captain Hook

Brute strength
The Ice Ogre is a large blue beast that lives under the Great Ice Bridge guarding the path of the path to legendary blue Ice Diamond in Jake and the Never Land Pirates, and is said to eat trespassers. He is voiced by Dee Bradley Baker.

The Ice Ogre first appeared in the episode "Hook on Ice!" Jake's crew teams up with Captain Hook's to find a legendary snow treasure. When both pirate crews make it to the Great Ice Bridge, Cubby tries to warn Hook that this is the home of the Ice Ogre, but Hook doesn't take the young pirate's words seriously. Then the beast emerges from under the bridge, about to attack the captain. But Hook is rescued by Jake, while Izzy distracts the monster with her ice skating performance. After locating the ice treasure Hook refused to share it with Jake and his crew only for Izzy to remind him that he would never have found the treasure if they hadn't rescue him from the ogre. 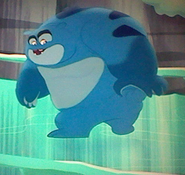