Records everything the program or user does

The Grid
The Identity Discs are the most fundamental piece of equipment to programs in both the Game Grid and in the Tron system. They contain all that a program is, in the form of a detachable glowing disc normally worn on the upper back. Everything seen, heard, or otherwise experienced is recorded on the disc.

Digitized users have often been issued with an identity disc shortly after arrival inside the system. Although a human being is a far more complex entity than a basic program, they still appear to need the device during prolonged stays when digitized. The discs of users can perform all of the same operations as for programs. Aside from its primary function as a receptacle of a digital entity's entire being, the identity disc is also a weapon. When energized, they have a lethal cutting edge that can derez an opponent instantly with a direct hit. This damaging capability can be applied in very close quarters where the disc can be used as a short-bladed weapon, and also as a buckler shield.

The primary combat application, however, is as a thrown weapon. In this capacity the disc is hurled at a target, and may ricochet off unyielding surfaces, before returning directly to its owner. Skilled users can even curve a disc in a shallow arc to avoid striking things blocking the line of sight to a target beyond. The leading edge of an identity disc does not harm its owner when caught, even when traveling at very high speeds.

Identity discs issued to Game Grid programs appear as solid discs with several concentric rings on the surface that give the appearance of a target circle, glowing with their owners' circuitry color. The circuits glow more brightly when the disc is in use, and have been seen to change size or flash on and off when active. In flight, old-system discs appear as uniform circular planes of light in their owners' circuitry color, trailing comet-like tails as they fly towards their targets. Despite this appearance, they are still solid to one another, and ricochet from other discs with an audible clank. The Identity disc's appearance in Tron: Legacy has a hollow center, making it more closely resembling a ring.

Identity discs in the Tron system appear as solid metallic rings, hollow in the center and colored white or black to match the wearer's garb, with a glowing line circling their inner edge, again matching the circuitry color of their owners. The outer edge, when energized, flares into a brilliantly glowing nimbus of white light with a slight tint recalling the owner's circuitry color; this active edge causes faint but visible ripples in the air when moved or thrown, and the air appears to shimmer around it when held still. These discs maintain their solid appearance while in flight, and generally behave like solid metal objects. Unlike the old-system discs, which had no visible means of attachment to their owners' backs, they are fitted over circular docks which rest between the shoulders of the wearer.

Broken discs in both systems emit lightning-like discharges of energy. In the Tron system, a program whose disc has been fractured is able to survive, and the shards may contain fragments of information known to the disc's owner. The only discs currently known to have been broken, belonging to Sark and Abraxas, were broken by impacts from other discs.

The Original identity discs in the Game Grid appeared as a solid disc of their owner's color, with several glowing concentric rings on the surface. The disks have lipped edges, resembling frisbees. An identity disc can also be used to hold liquid energy and drink from it like a cup. 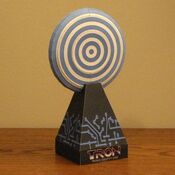 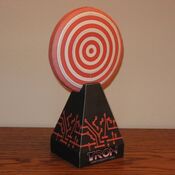 The appearance of an identity disc is of a solid ring with a glowing inner edge. The color of the inner edge matches the circuitry color of its owner. The outer edge, when energized, becomes a brilliantly glowing nimbus of white light with a slight tint of the owner's circuitry color. 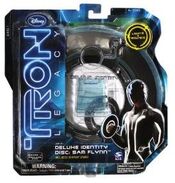 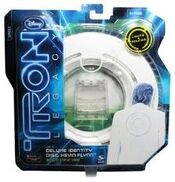 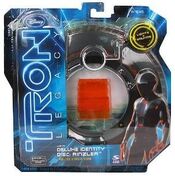 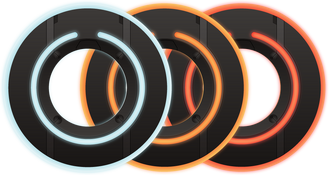 The discs in Tron: Uprising are the same as those from Tron: Legacy. It is revealed in the series that, if a program loses his disc, he will also lose his memory.

The Identity Disc is an average weapon, like the Kingdom Key. Just as in the film, a program was installed into Tron's Identity Disk in the I/O Tower to help him neutralize the Heartless and the MCP. After helping Tron save Space Paranoids from the MCP, Sora is rewarded with the Photon Debugger Keychain, which uses an Identity Disk as its token. Sark also wields an Identity Disk of his own. During the first battle, it can be knocked back at him, but in the second, it is to large for this to be possible.

The Identity Disc make a return in The Grid in the game for the 3DS. However, they are smaller and appear as black chakram-like weapons with a white outer edge, the inner edge displaying the same color of the owner's circuitry. Rinzler, Quorra, Sam, and CLU have been shown with Identity Discs, and Sora and Riku's Data forms have an Identity Disc incorporated into their designs.

An identity disc appears alongside two helmets and pairs of gloves from TRON in the queue for this attraction. These objects appear in a luggage-case passed through Star Tours security where they are observed by the droid G2-9T. This was a tribute to how TRON was once considered for the basis of the attraction which became Star Tours.

When given an Identity Disc, the recipient is told, "You will receive an Identity Disc. Everything you do or learn will be imprinted on this disc. If you lose your disc or fail to follow commands, you will be subject to immediate deresolution." This line appears in each movie; It is spoken by Sark in TRON, and by the female Grid announcer's voice in TRON: Legacy.