November 20, 2021
"If You Give a Frog a Cookie" is the second segment of the forty-eighth episode of Amphibia.

Anne trusts a questionable scientist, who may have found a way to get them to Amphibia.

Anne has set up a pond, really just a muddy pit, in the backyard for the Plantars after they feel homesick. Despite this, they are completely devastated. Even a batch of cookies, made with insects, are not enough to cheer them up as they have made a miniature of Wartwood. Anne suddenly gets a phone call from Dr. Jan who informs her that one of her contacts may have the answers she seeks, but warns her about visiting her without her consent as some scientists have a rough history. Anne informs the Plantars that Dr. Jan did not tell her anything important, but when they become solemn, Anne gets guilted and says that there is a scientist she contacted and is further convinced to go and visit her.

They head to Dr. Frakes' Brainasium, a children's educational center, and meet with her blue haired and down-to-earth assistant Terri before meeting the deranged Dr. Frakes. Frakes reveals that she has found a way to open portals to other dimensions. She came across this when a couple of months ago, a strange energy surge, caused by Anne opening the Calamity Box for the first time, created a portal that sucked up her portable CD player. Since then, Frakes has been able to create a machine that shows blurry photos of other dimensions. The Plantars ask that she open a window, but it can only stay open for five seconds and even then does not show Amphibia.

Another energy surge causes the Plantars' identities to be revealed. Frakes immediately kidnaps them in the hopes of dissecting them. Anne and Terri team up to rescue them, during which Terri gives up her job with Frakes and Anne uses the cookies she made to get the rowdy children in the Brainasium to attack Frakes. Terri drives Anne and the Plantars home with Anne finally coming down on the Plantars for constantly guilting her. They apologize and promise to be more patient. Terri admits that quitting Frakes was the best decision she made as she can now openly pursue helping them with opening another portal, thus salvaging her scientific career. Sprig then uses his guilting technique so that he can drive, resulting in them nearly crashing. 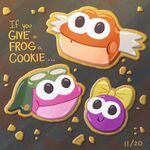 Terri agrees to help Anne and the Plantars building a portal.