The Nightmare Before Christmas
Inspector Gadget

Igor is Dr. Finkelstein's assistant and a minor character from Tim Burton's The Nightmare Before Christmas.

Igor is Dr. Finkelstein's assistant and is not much is known about him other than he likes dog biscuits.

Igor appears in this show as an assistant to Victor Frankenstein. He helps Victor in his experiments, which includes bringing Gerhard back from the dead as Frankenstein's Monster.

The Nightmare Before Christmas: The Pumpkin King

Igor appears the game when he ran off and accidentally locked Doctor Finklestein out of the lab. he was captured when the bugs drove the security system wild. Jack fights his way through the lab to destroy the bugs that's damaging the control box, and thus set Igor free. Afterwards, he returns to the doctor and release him back in.

Igor is first met when Jack goes to investigate Doctor Finklestein's strange behavior. He tells Jack that he cannot let him in, as for the Doctor's orders. jack offers to get Igor a box of Bone Biscuits if he lets him in. After Igor gets his biscuits, he helps jack disable the electrode machine guarding the doctor's lab.

Igor in Once Upon a Time.
Add a photo to this gallery 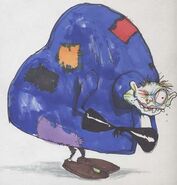 A very early concept art of Igor and along with Dr. Finkelstein. 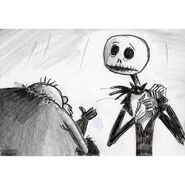 Igor and Jack in one of the original scenes.
Add a photo to this gallery 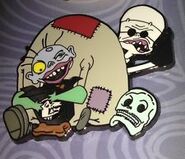 Pin.
Add a photo to this gallery

Retrieved from "https://disney.fandom.com/wiki/Igor_(The_Nightmare_Before_Christmas)?oldid=4353536"
Community content is available under CC-BY-SA unless otherwise noted.