The Imperial Interdictor is a vessel a six-hundred-meter-long cruiser that will appeared in the Disney XD animated series Star Wars Rebels, used by the Galactic Empire. Built on the standard Vindicator-class heavy cruiser hull, these cruisers severed a special purpose in the Imperial Navy. 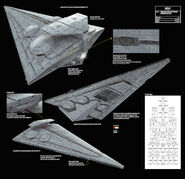 Retrieved from "https://disney.fandom.com/wiki/Imperial_Interdictor?oldid=2362732"
Community content is available under CC-BY-SA unless otherwise noted.