The Imperial speeder bike (also known as the 74-Z speeder bike) are small repulsolift vehicles that appeared in the Star Wars universe. They were popular throughout the galaxy as personal transports and recreational vehicles. They were so effective that the Galactic Empire used them for military purposes.

Speeder bikes make excellent ground reconnaissance vehicles. They can reach speeds up to five hundred kilometers per hour and are more maneuverable than both landspeeders and air speeders, allowing them to travel through terrain that would stop those vehicles. Most speeder bikes have a low flight ceiling of about twenty-five meters above ground level.

While they had access to several speeder bike models, the Empire's Scout Troopers preferrred the Aratech 74-Z bikes for both speed and reliability. The Aratech 74-Z can run for thousands of kilomiters without any significant maintenance, allowing biker scouts to operate unsupported for weeks at a time. These speeder bikes have armor plating and a single blaster cannon.

Aratech 74-Zs have two outriggers with four forward steering vanes. Maneuver controls are located in the hand grips, while altitude controls are built into the foot pedals. Speed normally is controlled through the foot pedals. Communications, sensors, and weaponry controls are set in a panel in front of the saddle, while a small cargo compartment is found beneath the seat. A biker scout may reset the control configuration through this panel: some biker scouts prefer to run the accelerator controls through the hand grips.

The forward undercarriage of the speeder bikes houses the maneuvering control units (linked to the directional vanes) and the blaster cannon. The rear of the speeder bike is taken up entirely by the power cell and repulsirlift engine.

Imperial biker scouts normally worked in units called lances. Each lance had four standard speeder bike scouts and a sergeant commander; a lance generally split into two elements in field operations. Imperial biker scouts could explore and survey far more territory per man than could those using almost any other type of vehicle, and these troops operated with unusual autonomy.

Speeder troops were normally used for scouting and exploration and were ordered to avoid combat so they could report to base command. Biker scouts were also used to spy on Rebel bases before a ground assault. Biker scouts were also trained for urban patrol duty, where the maneuverability and speed of their bikes made them a great asset in searches for entrenched Rebel urban assault forces. 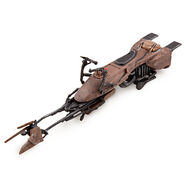 Retrieved from "https://disney.fandom.com/wiki/Imperial_Speeder_Bike?oldid=2362012"
Community content is available under CC-BY-SA unless otherwise noted.