Imperial Star Destroyers had two ventral landing bays. The aft docking bay-the main launch and landing bay for shuttles, support and cargo ships, and TIE fighters. It connected to forward interior bays and storage sections, all of which connect to immense lift shafts. Ahead of the storage sections was the forward launch bay.

In The Last Flight of the Harbinger, the rebels have taken control the Imperial I-class Star Destroyer Harbinger to destroy the blockade of Tureen VII.

In TIE Fighter comics 1-3, the Imperial II-class Star Destroyer Celebrity have been defected as the independent faction led by Admiral Gratloe.

In Star Wars: Squadrons, the Star Destroyer Victorum have been captured by the New Republic in the Battle above Yavin Prime.

Despite their imposing size and reputation, however, Star Destroyers were not invincible. Once the Rebels became more of a coherent fighting force, it quickly became known that the Star Destroyers were paper tigers, with many design flaws brought on by the Empire's arrogant assumption that any resistance would be light and easily dealt with exposed. Their turbolasers turned too slowly to track small moving objects such as starfighters, and had to rely on its starfighter complement and anti-starfighter screen ships to protect it from Rebel fighters such as the X-wing and Y-wing. This was easier said than done, though, as Rebel starfighters tended to have shielding, warheads, and more armor than a standard TIE fighter (Y-wings also had ion cannons that could disable enemy fighters, causing many Imperial pilots to underestimate Y-wings as merely free target practice), and a Mon Calamari Star Cruiser could make mince-meat of the screens and escorts. In addition, although the standard MC80 design had less firepower than a standard Star Destroyer, the MC80s had a key advantage: its shields. Mon Calamari ships not only had shields that constantly recharged, but also had multiple shield generators that were located inside the ship behind heavy armor; the Star Destroyer had its shield generators inconveniently located in two large geodesic spheres above its bridge that were easily exploited by Rebel bombers.

Close up of the bridge.

Rey explores the wreckage of the Imperial II-class Star Destroyer Inflictor on Jakku.

Rey shimmies down a rope inside the wreckage of the Star Destroyer.

The Inflictor wreckage on Jakku.

Star Destroyer near the Death Star.

LEGO model of the Star Destroyer. 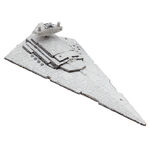